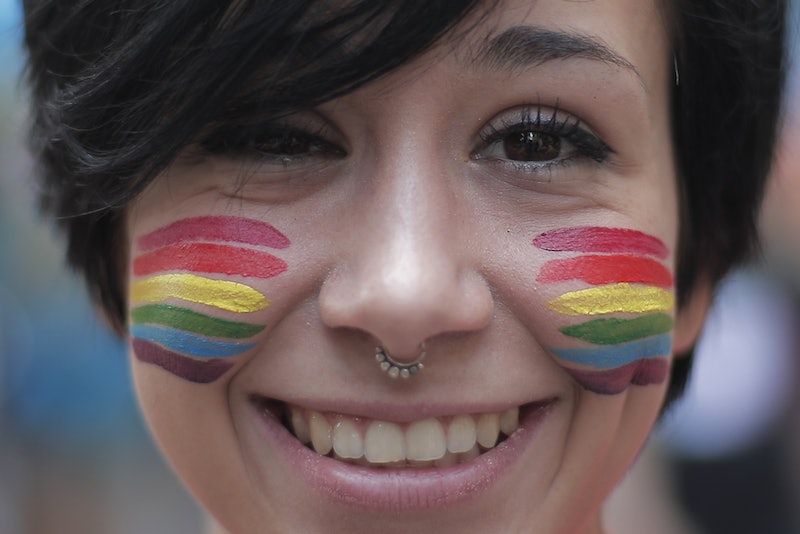 Now that marriage equality is officially the law of the land, what's next for the gay rights movement? It's a complicated question, and the answer depends very much on whom you ask. The most radical LGBTQ activists will tell you that gay marriage was never their goal — and that the fight was only prioritized by the LGBTQ rights movement because it was funded by rich, older, white gay men. Others will tell you that, while they do consider marriage equality a huge victory, the movement's next national goals should focus on homeless LGBTQ youth, trans* rights, or employment discrimination.

In other words, like any civil rights movement, there is no one clear answer to the question "what's next?" — because there is always more work to be done. But when Bustle got the opportunity to speak with Roberta Kaplan — otherwise known as the lawyer who argued United States v. Windsor before the Supreme Court in 2013, the case which ended up overturning the Defense of Marriage Act (DOMA)'s restriction that the federal definition of "marriage" and "spouse" apply only to heterosexual unions, thereby paving the way for full marriage equality — I couldn't resist asking anyway.

Kaplan, who just released her memoir Then Comes Marriage: United States v. Windsor and the Defeat of DOMA, was unsurprisingly unfazed by being asked the enormous question of should be next for the LGBTQ rights movement. (After all, she has answered all of Justice Scalia's questions, so it's hard to faze her.)

Kaplan's answer for "what's next" for the LGBTQ movement is five-part.

End Discrimination In The Private Sector

"First, we have to pass comprehensive legislation that says you can’t discriminate against gay people in the private sector," Kaplan tells Bustle. She's referring to the fact that, in many states, it is still legal for private companies to fire or otherwise discriminate against an employee because of their (real or perceived) sexual orientation or identity. That's right: unless we're talking about a government job, there is still no federal law on the books that says you can't fire someone for being gay or trans*.

Make Sure All Couples Can Adopt

"Number two, there’s still a lot of work that needs to be done in the Deep South," Kaplan says. "So, for example, I have the hearing coming up on November 6 in Jackson, Mississippi because Mississippi is the last state on the books that still has a law that says gay couples can’t adopt."

Moving beyond the legal realm, Kaplan says she believes the LGBTQ rights movement should focus on income inequality. One notable area where this plays out is the fact that homelessness affects the LGBTQ population in disproportionate numbers.

"A huge percentage of the homeless kids [40 percent, to be exact] walking around on city streets in places like New York are actually gay. They’re kids who were kicked out of homes by their parents. We as a community need to focus on how to make the lives of those kids so they have the same opportunities as someone like I had," Kaplan says.

"Trans* people have not achieved the same degree of progress that we [lesbian, gay, and bisexual people] have made. And they need to do that. We need to help them do that."

For trans* people, the struggles of homelessness are even more pronounced. According to a recent survey of trans* people by the University of California Los Angeles School of Law’s Williams Institute, one-fifth of the survey's respondents said they’d been homeless at some point. More than half of those respondents said they have been harassed at a homeless shelter by residents and/or staff; nearly one-third said they were turned away from entering in the first place — and nearly a quarter said they were sexually assaulted at a shelter.

Kaplan also acknowledges trans* rights as an issue, and cites it as her fourth point where the movement should focus, saying "trans* people have not achieved the same degree of progress that we [lesbian, gay, and bisexual people] have made. And they need to do that. We need to help them do that."

In addition to the horrible statistics cited above in regards to homelessness, trans* people also often suffer employment discrimination, a lack of access or coverage to quality healthcare, and difficulties obtaining name and gender changes on legal documents. Trans* people are also unemployed at twice the rate of the general population, and according to the National Center For Transgender Equality, 41 percent of trans* people have attempted suicide, compared to just 1.6 percent of the general population. According to the Williams' survey, a staggering 78 percent of transgender people who've experienced physical or sexual violence at school have attempted suicide. Considering those numbers, and the fact that even using the restroom of their choice is still a legal struggle, perhaps trans* rights should not be fourth on the list of LGBTQ activists like Kaplan, but first.

Find A Cure For AIDS & HIV

Finally, Kaplan believes the LGBTQ movement needs to get back to what might be considered an "old" issue for the movement: AIDS and HIV.

"The drugs for HIV and AIDS are great, but that’s not enough at this point. We’re the most technologically advanced civilization in history— we need a cure for AIDS and HIV. Not just treatment ... So what do I think "THE" next big issue is going to be? I don’t know."

So, What Are The Chances?

Considering all the challenges that still face the LGBTQ community, Kaplan is still surprisingly upbeat, and believes that the majority of people in the country actually have no interest in discriminating against LGBTQ people anymore. "No American really believes it’s OK to treat someone differently and discriminate against them simply because of who they are. Simply because it’s un-American."

There’s always going to be the Kim Davises of the world who want their 20 minutes of fame," Kaplan says. "But you know, it’s a little bit like whack-a-mole. I think we’re just going to keep whacking them down and I don’t see much of it being a very serious threat."

Perhaps that belief was reinforced by the remarkably positive experience Kaplan had while she was arguing United States v. Windsor. Unbelievably, she says that she received only "maybe three" pieces of hate mail in the entire time she argued the case before the courts. Though she normally tweets about gay rights, Kaplan says the most Twitter hate she's ever received was actually for saying that Ben Carson was off-base for claiming that the Holocaust could have been prevented with more guns.

"I guess people are just more passionate today about gun control certainly than they are about gay people being treated equally under the law." Kaplan is similarly unfazed by Kim Davis, the woman who made headlines this summer for defying a federal court order requiring that she issue marriage licenses to a gay couple in Kentucky.

"I actually think our community owes Kim Davis a huge bouquet of flowers, or maybe a big same-sex wedding cake as a thank-you present. I think she has been an enormous gift to us and our movement and our cause for a bunch of reasons," Kaplan says. "First of all, she’s just plain wrong. There’s not a judge who has looked at the issues presented by her case that doesn’t agree that her arguments are ridiculous. There’s always going to be the Kim Davises of the world who want their 20 minutes of fame," Kaplan says. "But you know, it’s a little bit like whack-a-mole. I think we’re just going to keep whacking them down and I don’t see much of it being a very serious threat." Her point would seem to be proven by the fact that the couple whom Davis refused to issue a marriage license just tied the knot this last weekend.

At this point, as Kaplan reiterated in a conversation at the New York Public Library with Gloria Steinem Monday night, she actually finds it more personally challenging to be a woman in the world these days than to be a lesbian. Of course, the struggles are forever intrinsically related. "No question that a lot of the prejudice and stereotypes that existed in the past about gay people, and may still exist today but in a much more subconscious way, are essentially grounded in sexism," Kaplan tells Bustle. Both prejudices, she says, "are grounded in this belief that each gender has a defined role — and anything outside that defined 'dog-husband-wife-picket fence-and two kids,' anything outside that, is somehow not OK or not appropriate to be welcome within the American community."

In order to move forward, Kaplan says, we must remember that feminism, racism, and LGBTQ issues are all integrally linked. Now there's one statement I think all of us LGBTQA activists should be able to agree on.