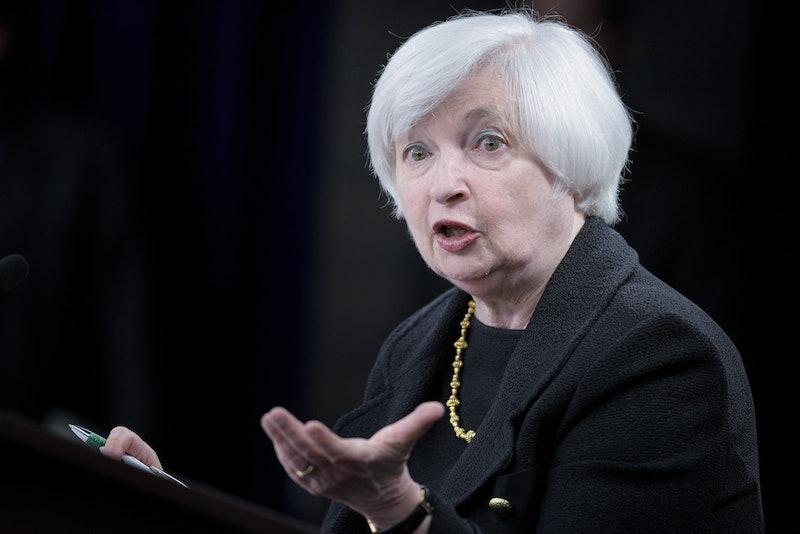 The third GOP presidential debate will be taking place on Wednesday, and it's high time we got to see that slew of Republican candidates take the stage once more. Their first two debates, hosted by Fox News and CNN respectively, brought in big ratings and were (from a progressive perspective, at least) equal parts entertainment and macabre horror. The third debate will be on CNBC, and it'll focus specifically on economic issues, which means you might hear a certain Fed chair's name come up — but is Janet Yellen a Republican?

It's a worthwhile question, especially if you're not terribly good at following the intersection of business, finance, and politics. Party affiliation can help to shield certain people from own-team criticism sometimes — that old "Reagan's eleventh commandment" business — and with a debate focused so heavily on the economy, you've got to figure that the person more or less tasked with setting U.S. monetary policy could come under fire, unless they had some conservative bonafides of some sort.

And that's clearly not the situation with Yellen. As Fortune detailed in 2013, while Yellen still faced the ever-divisive, highly political Senate confirmation process, she's a political Democrat and formerly worked for President Bill Clinton, which surely doesn't endear her to most anyone in the GOP.

In fact, Yellen's been the subject of GOP criticism for a while now, fending off accusations of political bias during her time as Fed chair. Back in February, Yellen was forced to directly defend the Fed against such allegations during her Congressional testimony, saying the following about her meetings with Treasury Secretary Jack Lew, according to Bloomberg.

The Federal Reserve is independent. I do not discuss monetary policy or actions we are going to take with the secretary.

The Republican complaints ultimately boil down to disagreements about the ideal role of central bankers and their monetary policies, disagreements that are reflected in the two parties' conventional economic wisdoms. Yellen, in addition to being the first woman to ever serve as Fed chair, is a Keynesian through-and-through, a label derived from the famed economist of the early-to-mid 20th century, John Maynard Keynes.

The Republican Party, on a philosophical and intellectual level, is very hostile to Keynes. His advocacy for occasional government intervention in the market (specifically, the use of spending projects to help fuel a flagging economy in a time of deep recession or depression) served as the historical underpinning for the Obama administration's response to the 2008 financial collapse — remember all that debate about federal stimulus versus austerity? That's essentially the stripped-bare fight between the Keynesian model and a more typically conservative, hands-off-the-market approach (and stimulus won, by the way).

So, what does all this mean for the debate? Mainly, that you'll probably hear somebody take a public shot at Yellen, assuming they're asked a question that gives them an opening. Of course, this raises the question of who would be most well-informed and suited to do so — we've gotten very little in the way of specific economic policy in the first two GOP debates, so there's much uncertainty heading into Wednesday.