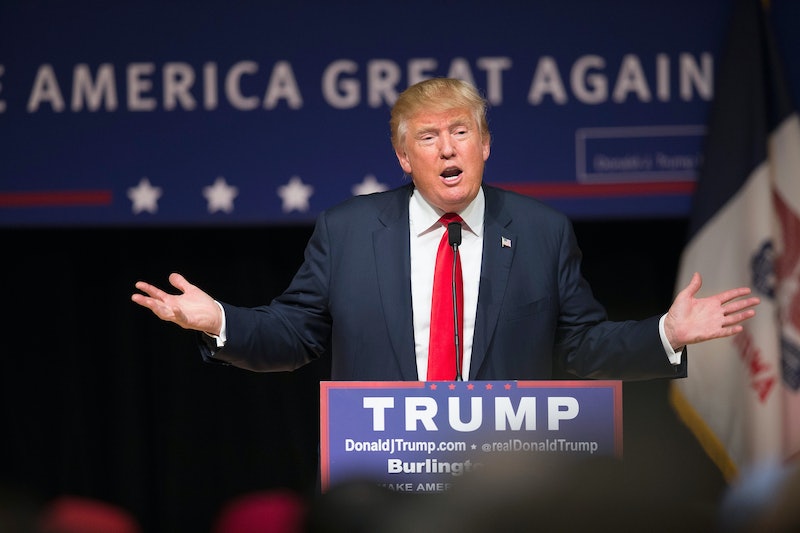 Is everybody almost ready for Halloween? It's just a few more days away now, and as always, it figures to be a good time. But it's not the only potentially spooky event coming up this week. Wednesday night is the third Republican presidential debate — and believe me, you don't know true terror until you hear Jeb Bush trying to deliver a laugh line. In other words, don't hold your breath for a treat. The GOP debate candidates' favorite tricks will be on display Wednesday night.

The debate will be airing on CNBC, and you can probably guess what that means. It'll be focused heavily (if not entirely) on economics and finance. In other words, it figures to be a much deeper policy dig than we've necessarily seen the Republicans have to endure so far. And whenever a debate aims to draw out some nitty-gritty details from the candidates — facts, figures, policy considerations, and economic philosophies sometimes phrased in ways many average people can find arcane — you can be sure they'll have some tricks up their sleeves to survive the encounter.

After all, if you're in a presidential debate, you have to consider that you could be caught unawares now and then, and how you handle those moments can be a make-or-break deal. Here are some of the favorite debate tricks of the GOP debate field, many of which you'll probably see on Wednesday.

How did the embattled frontrunner decide to open his last presidential debate? Why, by attacking Rand Paul for his poor poll numbers, suggesting that he shouldn't even have been on the stage, and taunting his physical appearance. Obviously, the big test of this debate will be how Trump handles facing off with Dr. Ben Carson, who's now polling in front of Trump for the first-in-the-nation Iowa caucus. But Trump also clearly operates with almost charmingly simplistic, high school bully's attitude to these debates — find the weakest prey in the pack, and rip into them so that everyone sees your teeth.

2. Marco Rubio: Don't Blink, Even If It Gets Awkward

Florida Senator Marco Rubio is known for a lot of things — his youth and enthusiasm, his work trying to build an immigration reform bill the GOP could accept, his apparently all-encompassing disdain for the Senate — but when debate time rolls around, there's one familiar theme. Namely, his awkwardly segued, slow windups into personal stories, and the occasional flat joke. In particular, his effort to score some quick laughs off of his years-old water bottle gaffe during his 2013 State of the Union response drew a decidedly muted reaction.

3. Senator Ted Cruz: Deny Climate Change, But Insist That The "World's On Fire"

When an overwhelming scientific consensus warns you that the world's oceans are warming to the point of triggering catastrophic worldwide environmental consequences and natural disasters, and your response is to deny the findings based on a narrow slice of cherry-picked, unrepresentative data, that's bad enough. But it's even worse when you also go around telling people that the "world's on fire," as Texas Sen. Ted Cruz loves to do. It might be slightly harder to work climate change into a financial and economic debate — although if the conversation turns to the impact of EPA regulations on businesses, for example, then Cruz could run with it.

4. Carly Fiorina: When The Facts Don't Fly, Use Moral Force

Fiorina's now sunk back down in the polls, but it shouldn't be forgotten that after her breakout performance in the first GOP undercard debate and a confident and polished (if mendacious) debut on the big stage on CNN, she was getting serious word-of-mouth as an upstart contender. She got a big, immediate bump from her performance, but then it slipped away. And the reason was simple: She wowed at the debate by speaking with great gravitas, emotion, and moral force about an alleged Planned Parenthood sting video. On subsequent investigation, the video turned out not to exist — at least, not in anything like the form she described.

Reasonable Guy isn't winning the GOP nomination in 2016; that's starting to look pretty obvious. So if Bush is still really serious about wanting to run, maybe he should start showing a little more grit and a little more snarl. If you can't beat Donald Trump and that bothers you, then why not just be as petty, demeaning, and rude to him as he is to you? At this point, even that kind of a wild about-face would make more sense than chugging along with the old plan. But based on the first two debates, which Bush took on under similarly bleak, urgent circumstances, there's no reason to expect that change is coming.

6. Chris Christie: Talk About 9/11 To Impugn Your Rivals

Early on in his presidential run, Christie appears to have gone to the Rudy Giuliani school of oral rhetoric, leaning hard into dramatic, sometimes factually misleading statements about his relationship to the 9/11 attacks. Perhaps the most cringe-inducing example was his retort to Sen. Rand Paul during the first debate, who brought up Christie's "big hug" with President Obama during the aftermath of Hurricane Sandy.

Senator Paul, you know the hugs that I remember are the hugs that I gave to the families who lost their people on September 11th. Those are the hugs I remember, and those had nothing to do with politics — unlike what you're doing by cutting speeches on the floor of the Senate and putting them on the Internet within half an hour to raise money for your campaign and putting our country at risk.

That, friends, is weapons-grade sanctimony. Expect Christie to take any opportunity to sound tough come Wednesday night — although again, the focus of the debate could take him into less-charted territory.

You can say a lot of things for Mike Huckabee, but he's clearly not one to bail on a friend. Whether it's backing up admitted child molester Josh Duggar and accusing his critics of "bloodthirst," or claiming (unconvincingly) that he'd take disgraced Kentucky clerk Kim Davis' place if she had to go back to jail, Huckabee will clearly stand behind you through thick and thin — provided you're a conservative Christian, that is.

8. Ben Carson: Be So Soft-Spoken That Nobody Cares How Little You Say

What is a major initiative Ben Carson would like to get through Congress? What kind of president would he be on the world stage? What policies would he support? Or, to put it more bluntly: What does he know? Agenda, vision, expectations — they're all just hollow, unanswered questions as far as Carson is concerned — so far, at least.

Considering how little sense the public has of Carson's qualifications to be president, and his decidedly laconic style — Trump, whatever you think about him, is dead-on in calling Carson "lower-energy than Bush" — the fact that he's now leading the polls in Iowa is a big deal indeed.

He keeps on doing it, and it seems to drive his fellow Republicans mad. Kasich has regularly, strenuously argued that his embrace of Medicaid expansion in Ohio is both a moral virtue and what his Christian faith demands of him, going so far as to urge his critics to read the Bible. It's one of the reasons Kasich has been bandied about as an agreeable, moderate presence who could help secure Ohio on election day, and thus quite possibly the White House — if he could somehow get the nomination, which he clearly can't. If he gets the chance to flaunt his faith-based compassion on Wednesday night, expect him to do so.

It's hard not to notice the distinctly different look and demeanor Paul displays in these debates, compared to his other Republican rivals. Paul's got a younger, slightly hipper look to him, and he sometimes likes to lean into the places where his views are at odds with staid conservative orthodoxy.

But in the two debates so far, he's failed to score any big moments, and has actually come out looking perturbed for the most part — most notably when he was attacked by Donald Trump, and when he unleashed an epic eye-roll after Christie's reference to hugging families of 9/11 victims. It might not be the most politically polished style, but it's sure fun to see.