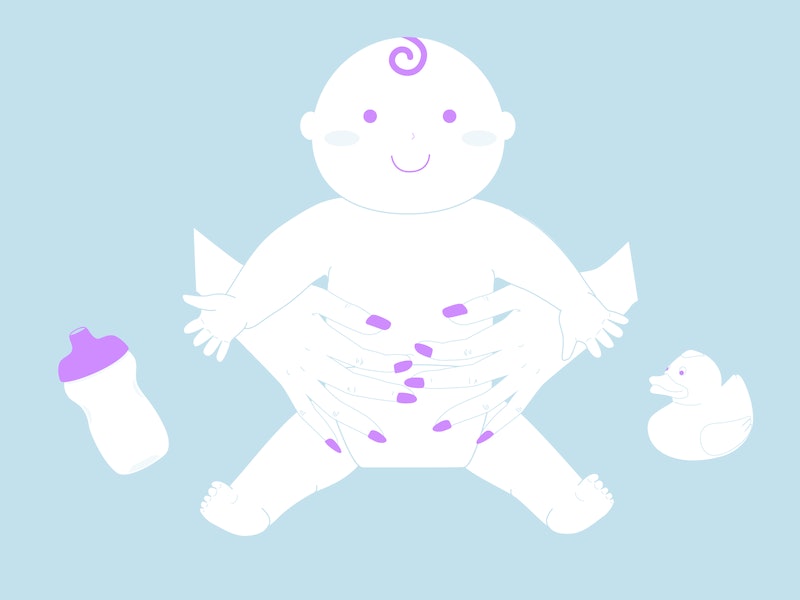 While in utero during those nine long months, babies are hard at work developing their many senses: They're able to hear external sounds, smell their mom, lick placenta walls, and "walk" inside the uterus to shift away from bright lights. But compared to the outside world, their mom's stomach can feel a bit like some kind of sensory deprivation tank. After birth, it takes those little guys a while to catch up with the new sensory input, and as researchers recently learned, babies don't really understand touch right away, basically because they're not quite sure where all those tactile sensations are actually coming from. The new study, led by study authors Jannath Begum Ali, Charles Spence, and Andrew J. Bremner, was recently published in the journal Current Biology, and shed an interesting light on just how babies come to understand the outside world as it relates to them.

Anyone who's played a simple game of peekaboo knows that babies have a particular love for seeing things disappear and reappear. This is because babies lack object permanence, so they believe that smiling face of yours actually ceases to exist once it disappear behind your hands. And then, suddenly — it's back. To them, you're a wizard.

But now, researchers say, they've also discovered that infants are straight-up confused by touch. While they're amused by the tactile simulation, like tickling, they don't really understand that you are the one causing that sensation. It appears that, at around four months of age, they haven't quite linked their visual and tactile senses to one another. At six months, however, infants will confuse where sensory input is coming from based on visual cues, suggesting that they're beginning to grasp the connection between the two.

To discover this, researchers attached remote-controlled, vibrating tactors to infants' feet, then crossed them. Four-month-olds were able to correctly recognize (by wiggling the stimulated foot in response) where the vibration came from about 70 percent of the time, regardless of where their foot was. Only two months older, though, infants whose feet had been crossed were worse at recognizing where tactile simulation came from, with a success rate of only 50 percent. Researchers suspect that at this age, infants begin to develop an understanding of their bodies as part of a larger, tactual-visual world.

"Our argument is that for young babies, touches are just perceived as touches on the body; they're not perceived as being related to what they are seeing or hearing, or perhaps even smelling," said researcher Bremner in a press release. "If one tries to imagine what this must be like — it's a bit of a dizzying idea." Indeed it is.

More like this
This Psychological Effect Might Be Keeping You From Hitting Your Goals
By Lexi Inks
Chelsea Clinton On The Best Advice She Ever Got From Her Mom
By Brianna Kovan
Here's How Cardio & HIIT Affect Your Body Differently
By Carolyn Steber
15 Talc-Free Makeup Brands For Safer Eyeshadows, Powders, & More
By Audrey Noble
Get Even More From Bustle — Sign Up For The Newsletter