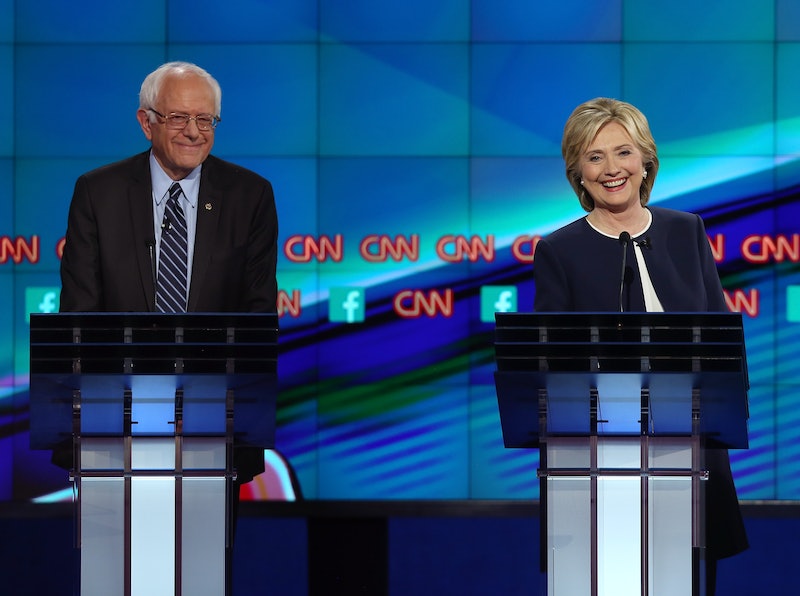 Regardless of where we stand politically, I think it can be reasonably agreed upon that some of the Republican presidential candidates are jerks to one another. At minimum, they don't always lend each other respect or professional courtesy during debates. Oh, the interrupting! The name-calling! The petty arguments over who has gone bankrupt the most times. It can get ugly. It's true that they disagree on issues that are direly important, so things will get heated. But there's a respectful way to do it, and then there's the way that Donald Trump, Chris Christie, and Rand Paul go at one another in debates. As an interesting counterpoint Democratic frontrunners Hillary Clinton and Bernie Sanders were pretty respectful of one another during their first debate earlier in October, even when they disagreed on core issues. The way that Clinton and Sanders respectfully interact is a lesson the Republicans could learn from.

Clinton and Sanders are pretty adamantly different on certain issues, and there's no doubt that they sparred during the debate (Clinton said that Sanders was too soft on gun control, for example). But during the Democratic debate, and at other times the candidates have spoken to the press, the two have been professional towards one another. It's a tactic that would make the GOP debates far less headache-inducing. Here are a couple of times Hillz and Bernie did disagreement right.

Don't Feed In To Negative Hype About Other Candidates

During the first Democratic debate in Las Vegas, Clinton was again asked about her use of a private email server, and the emails that have been released. Appearing to agree with Democrats who think that the investigation into Clinton's emails is a political move by Republicans, Sanders piped in to say "Enough about the emails."

This is something I can't imagine any of the Republicans doing if given the chance to play up a (perhaps) over-hyped controversy about a fellow candidate. Sanders used the chance to change topics, and bounced away from that would have been a chance to smear Clinton.

If Another Candidate Is Right, Say So

Toward the end of the first debate, the subject of paid parental leave was raised. Clinton stated that Republican candidate Carly Fiorina was using standard GOP scare tactics by saying there was no way small businesses could pay for parental leave. When Sanders made his comment on the same topic, he stated that Clinton was right about the scare tactics, and piggy-backed that sentiment to make his own point. The next topic was marijuana, where Clinton disagreed with Sanders on legalizing recreational weed (she hasn't taken a stance on the issue yet). But she also noted that Sanders was correct to bring up the huge problem of harsh prison sentences for pot users. This shows that it's possible to make a unique point without ripping another candidate apart for their own view on the issue.

Acknowledge The Good Work Of Other Candidates

In September, Clinton stated that she respected the way Sanders advocates for the issues he believes in. Just flat-out saying that she respects Sanders (and in a genuine way, not just as a precursor to a zinger), shows a great deal of civility and professionalism. Most of the candidates have probably done something that their colleagues admire. If it comes up, just acknowledge it.

In their first two debates, the Republican candidates have tended to allow the conversation to degenerate into senseless finger-pointing that has little if anything to do with the issues or any of their plans for a presidency. Instead of trying to smear one another when they disagree, Clinton and Sanders were good about avoiding bickering, and focusing on issues-based responses to one another.

Trump especially is guilty of yelling over other candidates, not allowing them to get a word in edgewise in some conversations. When Clinton and Sanders were going back and forth during their debate over what to do about big banks, the two expressed differing opinions, and did indeed start to speak over one another, but only for a couple of words. The two allowed each other to express their opposing opinions with very little talking-over. Overall, this made for a much more tolerable debate (honestly, all the shouting from multiple voices gives me a headache).

Be Tough, Not A Jerk

Sanders and Clinton called each other out during the debate. Clinton called Sanders soft on gun control, and Sanders said that Clinton's plans to save capitalism weren't what the country needs. It's not as if they go easy on one another — it's politics, after all, and they definitely want to win the nomination. But instead of insulting one another, as the Republicans are wont to do, Sanders and Clinton get tough and call one another out, but they don't stoop to ad hominem attacks. This of course shows respect, as well as a definite presidential air that schoolyard bullying doesn't support.