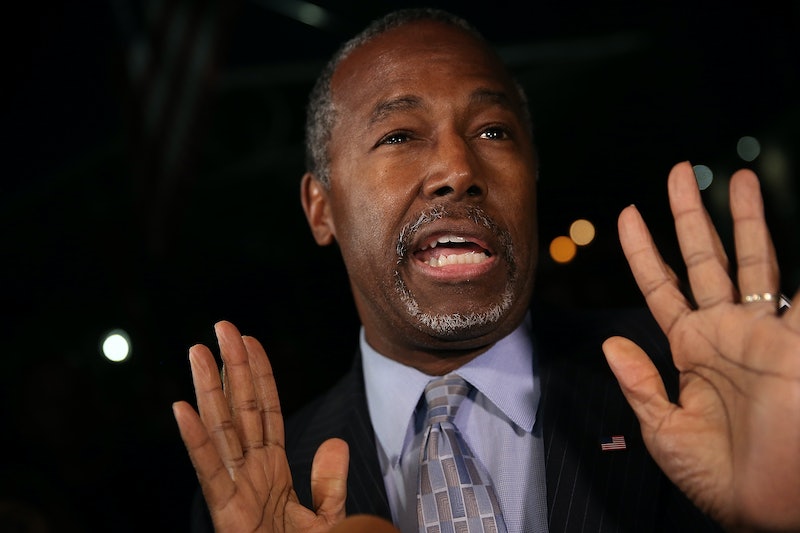 Since the second Republican primary debate, retired neurosurgeon and 2016 presidential hopeful Ben Carson has discussed the Holocaust and Adolf Hitler a surprising number of times. Whether he's comparing gun control to the Holocaust or predicting that a Hitler figure will plague the United States, Carson seems to like using the tragic events to convey his political beliefs. Carson has talked about the Holocaust and Hitler multiple times since the second Republican debate, which aired on CNN in September. And even in the face of backlash from members of both political parties, Carson has stood by his statements.

Of course, Carson is no stranger to controversial statements when discussing political issues. During a Meet the Press appearance this past Sunday, Carson compared having an abortion to owning slaves, arguing that both fetuses and slaves aren't and weren't given any rights or control over what happened to them. Unsurprisingly, the analogy, which Carson has used before, isn't resonating with many people who believe that a fetus and a human person shouldn't have the same rights. Carson is full of troubling analogies, and his presidential campaign would be stronger if he let his beliefs speak for themselves, rather than use shock tactics to get his point across. Here are just the most recent times Carson has brought up Hitler or the Holocaust.

1. A Hitler Situation Could Happen In The United States

During a late September campaign event in New Hampshire, Carson said that a Hitler situation could happen in the United States — and that it's a lot more likely than people think. "If people don't speak up for what they believe, then other people will change things without them having a voice," Carson said. "Hitler changed things there and nobody protested. Nobody provided any opposition to him." Carson went on to say that the "example is pretty clear" when he was asked who Hitler was in the United States, though he didn't provide any names.

Though his words may seem shocking, the statement is typical of Carson's beliefs. Carson said that "has a lot to do with control of thought and control of speech," and it's not hard to extend that sentiment to gun control as well (a point Carson would later reiterate in October with his statements about the Holocaust).

2. Guns Could Have Helped Stop The Holocaust

Earlier in October, Carson argued that the Holocaust's effects would have been less devastating if German citizens had been armed. "I think the likelihood of Hitler being able to accomplish his goals would have been greatly diminished if the people had been armed," Carson told CNN's Wolf Blitzer. "I'm telling you, there is a reason these dictatorial people take the guns first."

If that statement immediately calls to mind the tragedies of school shootings, that's not an accident. Carson also said that the shooting at Umpqua Community College in Roseburg, Oregon, which left nine people dead earlier this month, could have been less devastating if officials at the school had been armed. People of all political backgrounds were quick to disagree with his statements, because Carson's logic blames the victims for being shot and not defending themselves, rather than placing the blame on the shooter. The same is true for his twisted argument about Hitler.

3. Rabbis Agree About That Gun Idea

After surging to the top of the pack in Republican primary polls, Carson has stayed in the news by reiterating his argument about guns and the Holocaust, this time claiming that various rabbis have supported his theory. In his Meet the Press appearance Sunday, Carson told host Chuck Todd that he's "heard from many people in the Jewish community, including rabbis, who said, 'You’re spot on. You are exactly right,'" about his idea that citizens being armed could have helped stop the Holocaust.

Carson also tried to blame the media for its negative reaction to his comments, telling Todd, "some of the people in your business, quite frankly, who like to try to stir things up and try to make this into a big, horrible thing." He added that his comments were not "an anti-Jewish thing."

4. "I Never Intended For My Words To Diminish The Enormity Of The Tragedy"

Though Carson hasn't backtracked on his statements about the Holocaust, he did write an op-ed for The Jerusalem Post, published on October 14, to clarify that he didn't want to "diminish" the Holocaust. In the piece, Carson went on to argue that the United States should strengthen its ties with Israel.

Of course, this past month isn't the only time Carson has used analogies about slavery and the Holocaust. In 2014, Carson told Breitbart News that the United States is currently in a "Gestapo age" similar to Nazi Germany because "we now live in a society where people are afraid to say what they actually believe."

One reason Carson is rising to the top of the GOP primary polls may be that his words resonate with Republicans who feel marginalized in contemporary American society. During his comparison of slavery and abortion, Carson tried to present himself as an abolitionist of sorts, arguing that Republicans are the only ones who aren't afraid to speak up for the rights of the fetus, the way abolitionists spoke up for slaves' rights. And at the core of his statements about the Holocaust and gun control, Carson is connecting with those who may be struggling to defend gun rights amid continuous mass shootings in the United States. Still, Carson would likely appeal to a wider base if he didn't make such controversial statements.