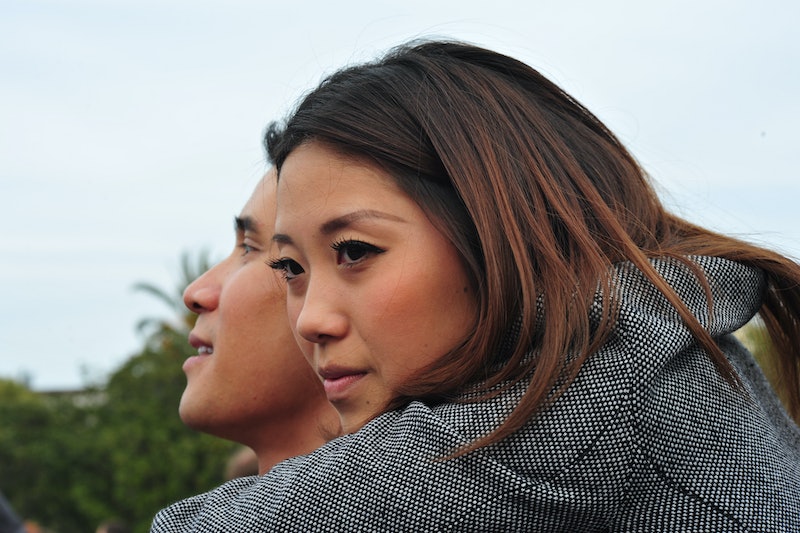 “Women try to keep the peace,” writes Ashley Randall, leader of a new old-fashioned study from the University of Arizona. According to Randall and her team, women regulate the emotions in a relationships, while men mirror their partner's moods. In other words, women are nurturing control freaks when it comes to their boyfriends' craziness.

The researchers looked at 44 heterosexual couples who had been together for an average of six years. Researchers shot video of couples, looking at aspects of daily life to find signs of cooperation, including communication and compromise. They found that women's moods tend to rub off on men, while women try and nurture their partners into their happy places.

Researchers suspect men may go along with a woman's mood in order to avoid a long discussion or fight—i.e., to avoid evoking "the psycho-bitch" all women are afraid of being.

Or at least I'm afraid of it—that's the label that prevents me from saying how I feel. An ex-boyfriend of mine used to get pretty mad pretty often—he wasn't pissed with me, but he liked to have a general venting of frustrations. For a long time, I'd try and soothe him and keep the mood light. Then, one day, I just got sick of it and walked out of his apartment in the middle of one of his flip outs. At the end of the day, I just felt like I needed to stop taking care of his moods and focus on mine.

That's why the write-up for this study just drives me crazy; nowhere is there any mention of the repercussion couples' interactions have on an individual's well-being. Researchers are basically telling us that there is only one model for a successful relationship: agreeable and nurturing lady, frustrated dude who reluctantly goes along. Randall and her team might as well have done this study 60 years ago, since the results show the same old-fashioned gender roles we see in Mad Men.

“People don’t grasp that part of being a happy couple is also being two strong individuals,” couples therapist Michael Radkowsky explained to the Washington Post. “It’s good to be in charge of your own mood no matter how your partner feels.”