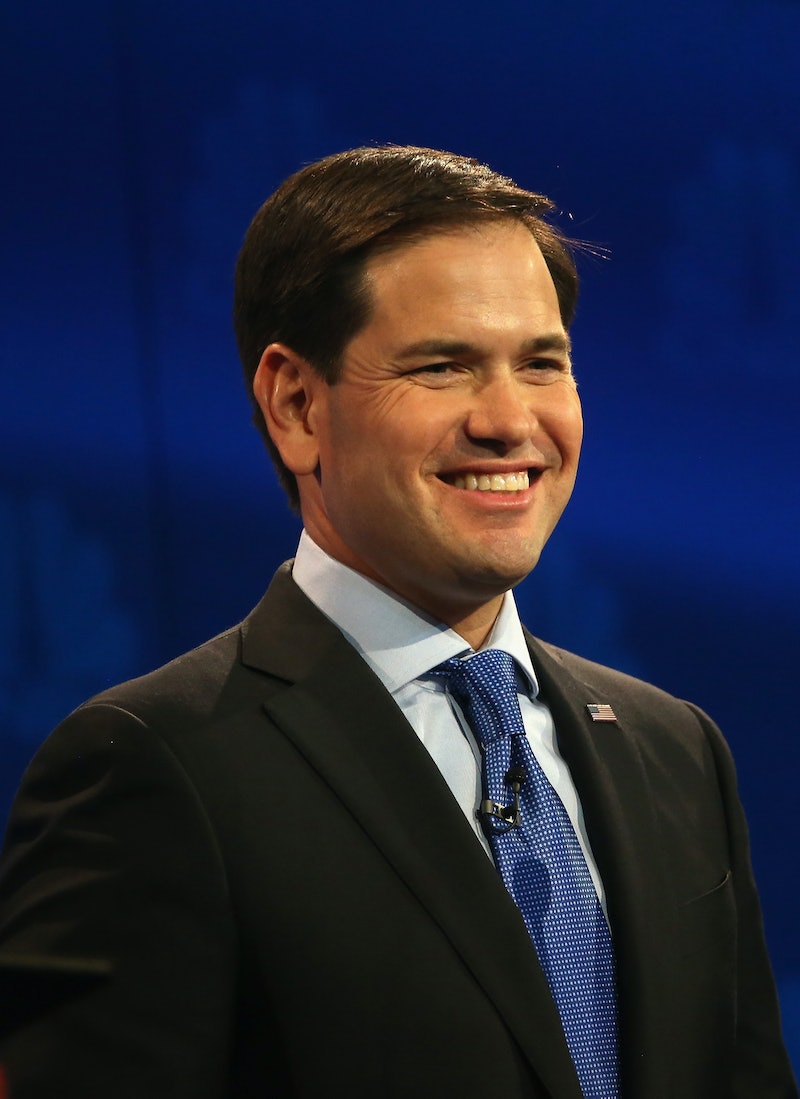 Before Wednesday evening's debate among 2016 Republican presidential hopefuls, Florida Sen. Marco Rubio wasn't a huge part of the discussion. Much of the talk about the GOP primary race centered around real estate mogul Donald Trump, who led the primary polls for months until recently being overtaken by retired neurosurgeon Ben Carson. But Wednesday's debate was Rubio's time to shine, as the senator showed his passion about leading the United States, even when the conversation wasn't strictly focused on the economy. During the third Republican debate, which aired on CNBC, Marco Rubio was the clear winner, and his performance helped explain his rise to third place in the race.

Though the debate was intended to focus on the U.S. economy and the candidates' economic policies, Rubio's most powerful moments came from his criticisms of his opponents and the mainstream media, which he (along with many of the other Republican candidates) views as having a liberal bias. When Rubio got into a heated argument with former Florida Gov. Jeb Bush, his remarks drew loud cheers and applause from the in-house audience. The Daily Show's Jessica Williams even tweeted that Rubio's retort "was legit like a monologue from Scandal."

The altercation came after the moderators asked Rubio about an editorial in the Florida Sun-Sentinel which called for his resignation from the Senate. The editorial noted Rubio's poor Senate attendance record, and Bush was quick to use it as a jumping-off point for criticism of Rubio. "You should be showing up," Bush said to Rubio, suggesting he should resign from the Senate if his presidential campaign is taking up too much time. But Rubio was quick to defend himself, saying that Bush is modeling his presidential campaign after that of Arizona Sen. John McCain, who also missed a number of Senate votes during the election season.

"I don't remember you ever complaining about John McCain's vote record," Rubio said to Bush at the debate. "The only reason that you're doing it now is because we're running for the same position and someone has convinced you that attacking me is going to help you." Rubio's response garnered much applause, but it wasn't the only thing he had to say about the discussion. According to Rubio, the Sun-Sentinel editorial "is another example of the double standard that exists in this country between the mainstream media and the conservative movement" — a statement that also earned praise from the audience. Rubio went on to criticize former secretary of state and Democratic presidential hopeful Hillary Clinton, too, saying that the "American mainstream media" is her Super PAC.

During Wednesday's debate, Rubio showed that he's got what it takes to stand up to his opponents. And in polls leading up to the debate, Rubio was doing better than Bush — and now, Bush and the other GOP candidates may finally see Rubio as a true threat in the primary race. Yes, the debate was about the economy, but it was also about the candidates proving themselves to each other as well as to the audience, and Rubio did both.