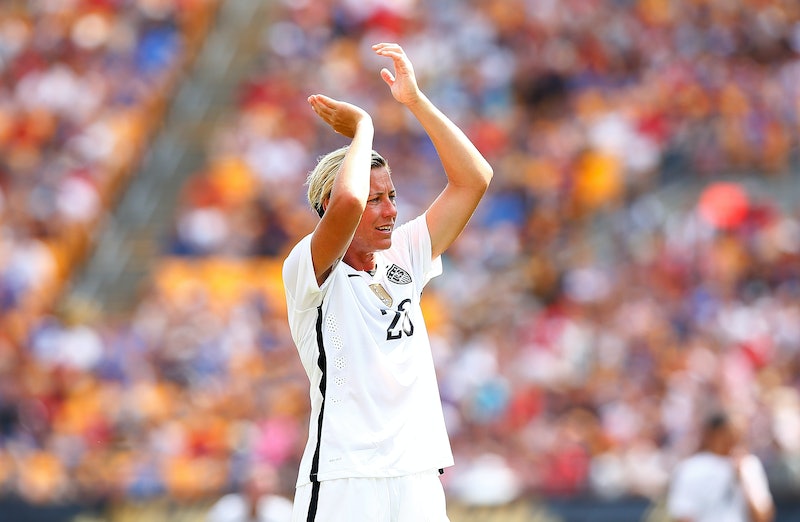 After President Obama honored the U.S. Women's national soccer team Tuesday, top scorer Abby Wambach announced she is retiring at age 35, after an incredible career. Wambach, who is the leading scorer in the history of international soccer (she has more than, say, Mia Hamm or Pelé), just won her first World Cup this past year. Obama invited the team to the White House and provided the most fitting quote to celebrate them, saying, "This team taught all of America’s children that 'playing like a girl' means being a badass." And even though he didn't know it yet, it was a beautiful farewell to Wambach, who truly is a badass.

According to the U.S. Soccer news release, Wambach will end her 15-year international career with a staggering 184 goals — more than any woman or man in international soccer has ever scored. Calling Wambach "one of the world’s all-time greatest players," U.S. Soccer wrote that she excelled in soccer since she was five. Excel she did. Wambach has been known for her stunning goals for years — including a famous score in 2011 during the late minutes of a World Cup quarterfinal considered "one of the most dramatic goals in soccer history." Although she didn't play much during the 2015 World Cup — entering only in the 79th minute — she was a class act throughout, cementing her position as an unforgettable player who deserves every accolade she got.

Wambach's last game for the United States will be on Dec. 16 against China PR, the last game on the USWNT's victory tour. The 2012 FIFA Women’s World Player of the Year — the only American to hold that title, other than Mia Hamm — said about her retirement in the news release:

After much deliberation and talking with my friends, family, teammates and our coaching staff, I’ve decided to finally bring my soccer career to an end. While we still have more work to do for women’s soccer, after bringing the World Cup back to the United States this summer, I’m feeling extremely optimistic about the future of our sport. It’s been an amazing, wonderful ride and I can’t wait to see what the next chapter of my life brings.

It's a bittersweet goodbye to Wambach, but her illustrious career and a recent World Cup win have her going out in style. And though it might seem like no one could top Obama's statement about how playing like a girl means being a badass, U.S. head coach Jill Ellis said it all when wishing Wambach the best:

Abby is a player who has transcended our sport and her legacy as one of the world’s greatest players is set forever.