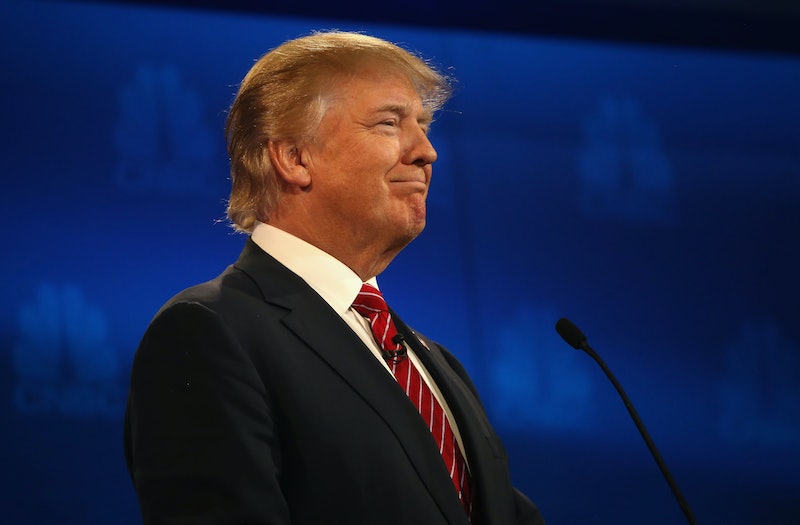 Well here we are. The third GOP debate is officially upon us. The candidates have assumed their positions on stage. And the memes? Man, are they flowing. Especially the Donald Trump memes, which started flooding Twitter almost as soon as the night started. But is that really any surprise? The Donald alone has provided us all with a ton of comedy gold this election season, thanks to his ridiculous one-liners, completely nonsensical policy plans, and his vow to "make America great again," while ironically calling everyone in his wake a total loser. And of course, there's also the hair, which will provide us with fodder for all of eternity, whether or not he wins the GOP primaries.

But while the thought of Trump one day sitting in the Oval Office might scare the crap out of you, you have to admit that he sure is keeping us laughing for the time being. During the last GOP debate, on September 16, Twitter had a field day sharing memes featuring all of the Donald's many looks — from his ultra-serious frown to his wildly confused eyebrows. But not everyone's laughing. Let's not forget that Trump is doing pretty well against his rival candidates. Still, the tides may be changing; though Trump was leading in the polls since he first announced his candidacy, the latest national poll shows that Ben Carson has knocked him out of the top spot.

But no matter what happens Wednesday night, one thing's for sure: We will always have these memes to remind us of just how ridiculously entertaining The Donald can be. And for that, let's just be grateful.

Oh, Donald. You provide us with such a never-ending flow of entertainment. Never change. (Eh ... or do.)