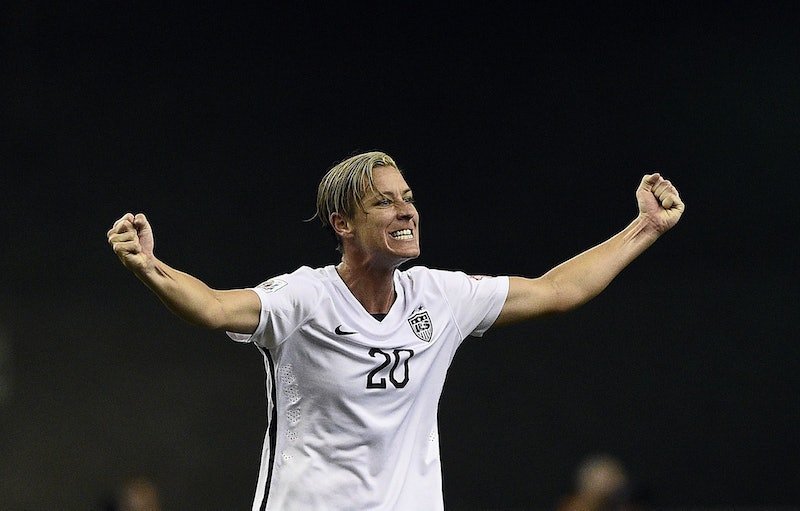 It was a big day for women's soccer, what with visiting President Obama and the news that U.S. soccer star Abby Wambach will be retiring. Wambach, who's a leading international scorer, isn't just one of America's best female players — she's one of the greatest players of all time. Still riding high off of the 2015 World Cup win — which was definitely one of Abby Wambach's best moments — the player announced her upcoming retirement after the team's White House visit on Tuesday.

When the president told America that "This team taught all of America's children that 'playing like a girl' means you're a badass," one of the badass female players he was definitely talking about was Wambach, who holds multiple international records and a reputation for playing through injuries. When Wambach retires from professional soccer on Dec. 16 after the last U.S. victory tour match, she will do so after fulfilling her major career goals.

But while it's sad to think about the U.S. women's team without Wambach and her thrilling headers, it's important to remember all the amazing moments that got her to this point. From high school athlete of the year to all-time great, it's been a long road for Wambach. And we should remember every one of her best moments.

When She Won Two Gold Medals

In the 2004 and 2012 Olympics, Wambach and her teammates brought home two separate gold medals, helping to secure her position as one of the greats. During those competitions, Wambach scored nine Olympic goals — the most by any American player.

The Time She Got Back On The Field

Wambach probably would be retiring as a three-time gold medalist, if it weren't for an accident. Less than one month before the 2008 Olympics, Wambach broke her leg — an injury that would keep her out for almost a year, and is a serious detriment to a professional soccer player. But she overcame the injury, and shortly after returning to the game broke a major world record.

When She Scored The World's Greatest Goal

You can't talk about Wambach without talking about her signature header move — a move made famous by her near-impossible goal during the 2011 World Cup. During overtime in a quarterfinal against Brazil, Wambach scored the tying goal at the last second possible, making it the latest goal in soccer history. The team would go on to win the match, but lose the World Cup. But Wambach's header was voted the greatest goal in World Cup history, and cemented Wambach in soccer history.

When She Was Named FIFA Player Of The Year

There's probably no feeling of validation equivalent to being named the FIFA World Player Of The Year, something that Wambach achieved in 2012. That was also the same year that she got her Chipotle Gold Card, which grants her free burritos for life. So 2012 was a pretty good year for Wambach. And I bet she'll really be enjoying that gold card come retirement.

The Time She Was Stapled In The Head And Kept Playing

Even casual soccer fans are probably familiar with the time that Wambach busted her head open during a World Cup qualifier game against Mexico in 2010. There was blood literally gushing from her forehead — but instead of sitting out, Wambach had her face stapled on the field and then kept playing. Warning: The above video shows every gory detail.

When She Hit A Big Career Milestone — Twice

In 2009, while playing in her hometown of Rochester, New York, Wambach became the fifth American woman to score 100 international goals. Several years later, she would go on to obliterate the standing record for most international goals, which had previously been held by Mia Hamm. With her 159th goal, Wambach beat Hamm's record. She's now set a new one, as she will retire with 184 international goals come December.

When She Finally Won A World Cup

Since joining the U.S. National Team, Wambach competed in four FIFA World Cup tournaments — but none were as memorable as the 2015, when Wambach and her teammates secured the first American World Cup win since 1999. And Wambach wasn't a passive part of the success — she scored the winning goal in one of the qualifying matches.

As she heads into retirement, Wambach should be feeling pretty good about herself. She holds several titles, championships, and records, and she'll be heading home to spend more time with her supportive wife and two adorable bull dogs. If that isn't a life goal, I don't know what is.