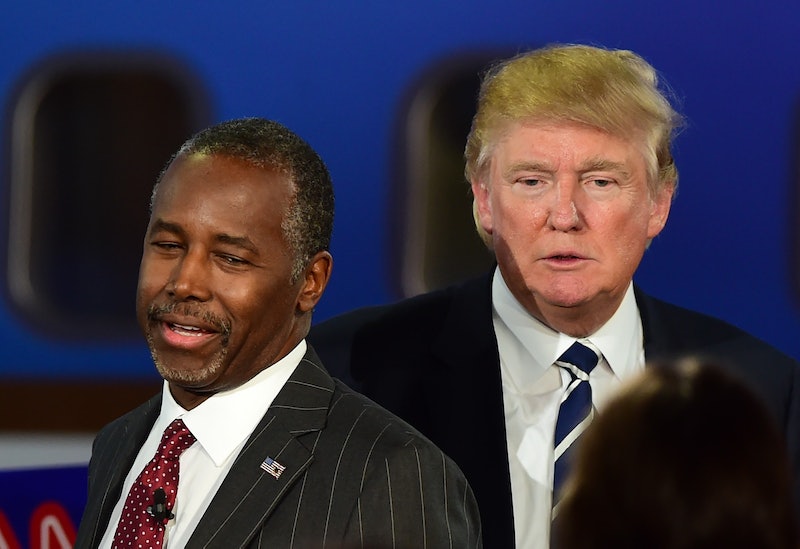 Wednesday night is going to be a big one if the current GOP primary polls are any indication. Unlike the first two showdowns, billionaire real estate mogul Donald Trump isn't going into this one with nearly as many bragging rights, after falling in several key states to retired neurosurgeon Ben Carson. While Trump has been able to maintain a wide berth between himself and the remaining Republican field up until this point, Carson's surge has shaken the brash front-runner significantly and forced him to rethink his game plan. The big question for this Wednesday's debate: in the inevitable debate showdown between Donald Trump and Ben Carson, who will win big?

Overall, Trump still has the advantage heading into the debate with his background in the business sector. Even taking into account his various corporate and legal woes over the years, Trump still understands the financial market better than Carson, who up until this point has instead opted to ride a wave of evangelical voter support. In fact, comparing apples to apples, Carson's Balanced Budget Amendment and tax reform plan span about the same length and depth as an Internet comment when compared to Trump's — and that's saying something, considering that Trump's tax plan itself has been criticized as improbable in certain respects (some of those criticisms even stemming from his own party).

According to the rising Republican star's meager tax plan, the federal government would operate on a flat tax of around 10 percent. Carson himself has compared his plan to one borrowed heavily from the notion of tithes, a practice still used in the Church of Jesus Christ of Latter Day Saints and among various Protestant and Catholic churches as well.

"We need a significantly changed taxation system, and the one that I've advocated is based on tithing, because I think God is a pretty fair guy," Carson explained at the first GOP primary debate in August. "That's why I've advocated a proportional tax system [where] you make $10 billion [and] pay a billion, you make $10 [and] pay one, and everybody gets treated the same way — and you get rid of the deductions, you get rid of all the loopholes."

Unfortunately, as Forbes' contributor Tim Worstall pointed out in an op-ed earlier this year, that sort of plan, while idealistic and charming in nature doesn't quite fly in the real world. "I like my flat taxes but the idea that the United States Federal Government could be funded by one at 10 or even 15 percent is simply wrong," explained Worstall. "[...] The rate would need to be around 20 percent."

However, Carson may be able to make up for his amateurish views on tax reform and budget woes with sheer polling power. After all, the evangelical voter base is not one to be trifled with, and if there's one candidate that the religious right can get behind (outside of Mike Huckabee and Rick Santorum, who are barely clinging on in the 2016 race at all), it's Ben Carson.

Despite the fact that Trump tends to poll well with religious voters, an early September Gallup survey showed that his appeal among the highly devout lagged a whopping 34 percentage points behind Carson, who placed first on the list of GOP candidates with 56 percent. Even among those polled who identified themselves as "moderately religious", Trump trailed Carson at 36 percent to Carson's 52 percent. For all intents and purposes, Carson has easily cemented himself as the number one choice for the religious right, going into Wednesday's debate. Barring a total policy gaffe or numbers slip-up, Carson's polling statistics should hold him over until the end of the evening.

None of that will matter, however, if Trump sticks to his guns and refuses to attack Carson, as he recently told ABC's Good Morning America. "He's been so nice to me, I can't do it," Trump told host George Stephanopoulos on October 14. For his part, Carson told Bloomberg's With All Due Respect on Friday that he wouldn't respond in kind, even if Trump did throw a few barbs his way at the third debate. "If he does attack me, I'll continue to talk about issues," said Carson. "I just really don't buy into the attack-your-fellow-Republicans thing. I'm just not going to do that."

Of course, talk is cheap and presidential candidates aren't exactly known for keeping their word. With a slew of complex issues at hand and Carson's sudden surge in the polls looming overhead, it's more than likely that the debate stage will turn into a boxing ring quicker than you can say "I told you so."