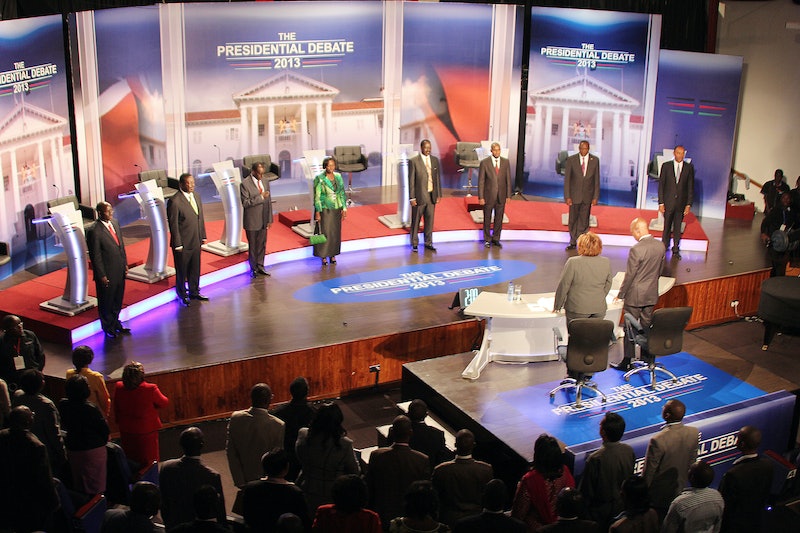 In the United States, we love our presidential debates. We can't get enough of them, really. We'll have five primary debates for just the Republican Party and eight debates in total before 2015 ends, and that's not even counting the general election debates set for next year. But even more than the debates themselves, we love the goofy, awkward, laughable incidents. Not everyone around the world gets to experience these wonderful moments, but for those countries that do, they sure have held their own in demonstrating that presidential debates can be just as ridiculous outside of America. Here are seven countries that prove it, including one that could take some notes from America's debates on how to spice up its own televised showdowns.

Other countries unfortunately don't get to experience the wonderfully uncomfortable feeling of hearing Donald Trump talk about how much better off America will be if he wins or have the frightening realization he could actually win. But they do have their own versions of wacky candidates. A candidate who is simultaneously facing trial for crimes against humanity? Got it. A candidate who refuses to participate in debates? Yup. And when the candidates aren't interesting enough, just get a Playboy Playmate to make an appearance.

Mexico goes big or goes home when it comes to its own presidential debates. The country actually made Stephen Colbert jealous three years ago since the 2012 campaign just wasn't cutting it. What did Mexico do, exactly, to provide a show-stopping debate? Well, turns out viewers weren't all that interested in the candidates because the usher was former Playboy Playmate, Julia Orayen.

Orayen didn't only distract the viewers at home. The country's New Alliance party candidate that year, Gabriel Quadri, said, "It is impossible not to concentrate your attention on a woman so spectacular." Way to keep your focus on the real issues, Quadri.

When the incumbent prime minister doesn't feel like going head-to-head with other candidates, who says he has to? David Cameron, who has held the position since 2010, at first only agreed to do television appearances where he would be individually interviewed and take questions from audience members prior to the 2015 election. The opposition Labour Party was not happy: a spokesperson said a debate between Cameron and then-Labour leader Ed Miliband wasn't happening "due to the cowardice of David Cameron." Cameron did go on to participate in an election debate with six other candidates.

But during a challengers' debate held two weeks later, which Cameron did not attend, the second most searched question on Google was: "Why is David Cameron not at the debate?" Come on, Cameron. Give the people what they want.

Because the 2007 election had resulted in weeks of deadly violence, Kenya's first attempt at a presidential debate in 2013 was both welcomed and warned against. Leaders inside and outside the country called for a peaceful and fair election this time around. Kudos for holding a televised debate at all, Kenya.

But one of the frontrunners to take part in the debate was Uhuru Kenyatta, who was at the time facing trial at the International Criminal Court as a suspect for crimes against humanity during the 2007 election. Kenyatta eventually won the election and is the current president. No kudos for that.

Speaking of no-shows, more than one candidate made things interesting by ducking out of a Zambian election debate in January 2015, just days before the scheduled event. Heritage Party candidate General Godfrey Miyanda, the country's former vice president, opted not to attend the debate one day beforehand. His excuse? A tight campaign schedule.

Patriotic Front candidate Edgar Lungu also didn't confirm his attendance with the host television station five days before his scheduled appearance in the second debate, and then just didn't show. But then Lungu won the election, so there's that.

Liberal Party candidate Justin Trudeau won Canada's general election this year, taking over as Canada's new prime minister. And Trudeau's aggressive performance during the first election debate back in August may have helped him reach that point.

Remarking on longtime incumbent Stephen Harper's disconnect with Canadian citizens in regards to the nation's struggling economy, Trudeau said, "He may not feel that from 24 Sussex but I know you feel that at home." Burn.

Iran made sure not to disappoint during its series of presidential debates in 2013, allowing viewers to see a side of top politicians they may not have been used to.

Candidate Hassan Rouhani stated that if elected, his administration would provide "security and tranquility to all Iranians," but opposing candidate and mayor of Tehran Mohammad Bagher Ghalibaf accused Rouhani of being selective about which Iranians were provided that security in the past. Then things got really real, with Rouhani responding that he had "so much information," but was not willing to destroy his opponents. Rouhani ended up winning the election.

Though politics in Taiwan is usually pretty lively, according to The Wall Street Journal's China Real Time reporter Aries Poon, the first presidential debate for the 2012 election didn't get very feisty. To be more exact, the debate didn't give viewers what they're looking for when it comes to these kinds of televised discussions: "[it] left audiences without many revelations, punch lines or memorable sound-bites."

The event was so boring that a Department Chairman of Speech Communication at a Taipei university called the debate "quite empty." It looks like, when it comes to live head-to-head battles between presidential candidates, Taiwan could still look to Donald and Jeb for some inspiration.