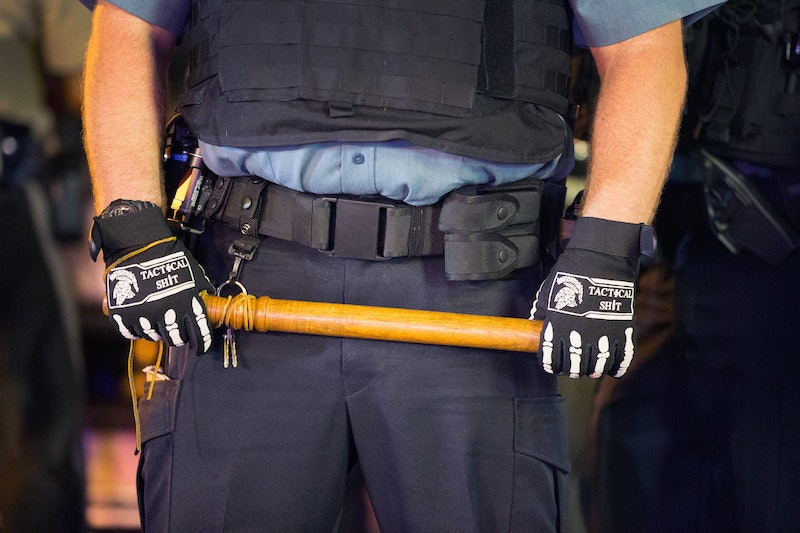 The Spring Valley High School video that showed an officer slam and drag a young teenage girl across her classroom continued to make headlines Tuesday after an ignorant comment by Richland County Sheriff Leon Lott. When responding to a question about possible racial motivation behind Deputy Ben Fields' aggressive treatment of a black student who was allegedly disrupting school, Lott assured reporters at a Tuesday press conference that Fields cannot be racist because he has been "dating an African-American female for some time now." The politically incorrect comment is bringing renewed scrutiny on Lott, a law enforcement officer who has been in and out of national headlines over his 20-year career as Richland Country sheriff.

Lott was born in Aiken, South Carolina, in 1953 and has pursued a lifelong career in law enforcement. According to his sheriff's bio, he has an impressive academic background, holding an associate degree in police administration from the University of South Carolina, Aiken, as well as a bachelor's in sociology and master's in criminal justice from the University of South Carolina, Columbia. He later graduated from the FBI National Academy, FBI National Executive Institute, Harvard University's John F. Kennedy School of Government, and Furman University's S.C. Diversity Leadership Academy. Lott has worked in law enforcement in Richland County for 40 years and was elected to the office of sheriff in 1996. Lott has received many commendations while sheriff, including the South Carolina Law Enforcement Officers' Association's "Toughest Cop" award in 1999 and 2004.

During his tenure as sheriff, Lott has consistently made headlines — some good and some bad. In 2009, he was in charge of investigating the now infamous picture of Olympian Michael Phelps smoking out of a glass pipe at a party in Columbia, South Carolina, Lott's own jurisdiction. Although Lott announced that after two weeks of investigation, there was insufficient evidence to arrest Phelps, it brought the sheriff into the national spotlight, if only briefly.

Even as recently as in August, Lott's department was suspended from a federal program that loans military surplus equipment to local law enforcement. Lott traded the two planes, which were still owned by the federal government, to a private aviation company for a different airplane, without proper permission from the Department of Defense. The county supposedly traded the two C-23 Sherpas for a more useful plane, a Cessna Stationair, that was "better suited for most operations conducted by the Department than the Sherpas, including drug surveillance and interdiction," according to the deal's contract.

Given the high-profile nature of the Spring Valley case, it's no wonder Lott called in the FBI to help investigate Fields' actions. But the sheriff's comments about Fields' dating preferences have stirred up even more controversy. It remains to be seen if Fields will be fired, but he has since been suspended without pay, a more telling sign than if he had been put on paid leave. (Update: Ben Fields has been formally relieved of his position as of Wednesday afternoon.)