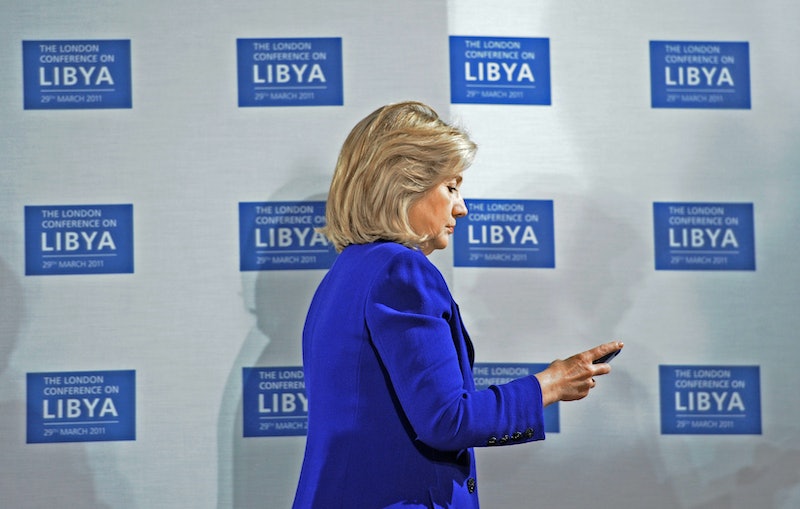 If Donald Trump got to dominate the first Democratic debate via his Twitter account, it's only fair that his Democratic adversaries get the chance to, as well. With all the Republican presidential candidates gathered on stage together, Hillary Clinton live-tweeted the GOP debate, and probably took a lot of satisfaction out of it.

Since being declared the popular winner of the first Democratic debate earlier this month, Clinton has been enjoying a comeback in her presidential campaign. During the Democratic debate, someone from her campaign was acting at lightning fast speeds to tweet out her best lines of the night, compile videos, and comment on the other candidates.

So no matter who is one stage, you can be sure that Clinton's Twitter account will be active. Clinton live tweeted the second debate, which has thus far been one of the most chaotic, hostile primary debate our country has seen in a while. Throughout the night she offered barbed comments about the candidates, cracked a few jokes, and took more than a few opportunities to promote her own campaign.

Twitter has been one of Clinton's greatest assets during the campaign thus far. Her debate live coverage is always on point — and Wednesday night was no different.

On What She Wants To See From The Debate

Translation: "The offensive rhetoric of the Republican candidates about Latinos is shameful and has no place in politics."

Translation: "Republicans still think that giving more resources to the rich will benefit the middle class."

Translation: "Women should earn the same for doing the same work as men. Period."

On Her Final Reactions

Although Clinton wasn't nearly as funny during this debate's live-tweeting session, she made some pretty important points. But it was super nice of her to offer that free sticker.