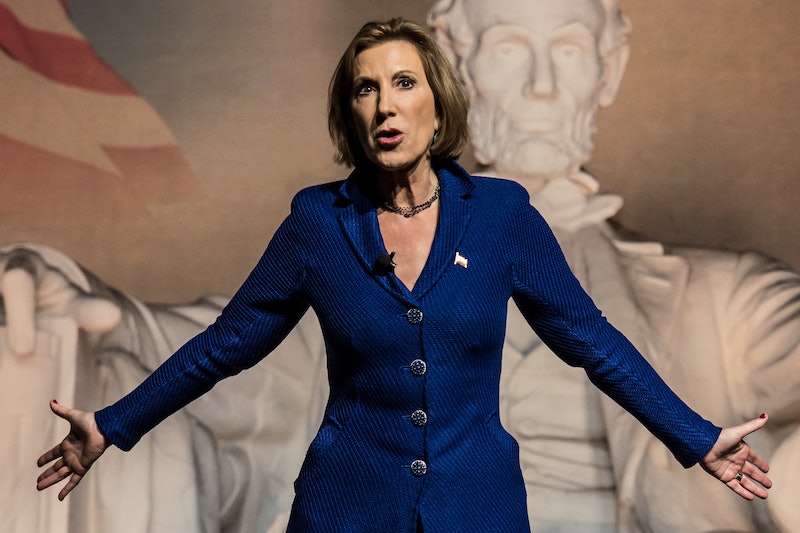 After two stellar debate performances, there were some pretty high expectations for Carly Fiorina's closing statements at the third Republican primary debate. After the first debate, she skyrocketed out of the happy hour forum and onto the main stage, where she drew major attention at the second debate. Her stirring speech about Lady Liberty and Lady Justice was the best closing statement of the night, and a fitting conclusion for the only female Republican candidate. Fiorina has established herself as a skilled debater, with punchy lines and strong rhetoric, and nothing showed that better than her closing remarks Wednesday.

There was a lot riding on her performance in Colorado. After the first two primary debates, Fiorina experienced substantial boosts in the polls. But in the time since the second debate, those numbers have dropped, and her campaign has lost momentum amid the messy controversy surrounding her allegations about the Planned Parenthood videos. But although she still sits at the top of the pack, another debate bump could do her campaign well as she fights the strong numbers that both Ben Carson and Donald Trump are pulling in.

But did her performance stand out enough to help her at all?

Fiorina's closing statement was strong, capitalizing on the momentum that drove her through the night, and serving as a fitting closure to a well-done evening. Although she didn't shine in the way that she has in her first two debates, she was definitely at the top of the pack. It wasn't as stirring as her "Lady Liberty" closer, but it was simple, to the point, and very Fiorina.

You know, every election we hear a lot of talk. We hear a lot of good plans, and we hear actually a lot of good intentions. But somehow for decades nothing has changed. What we need now is a proven leader who has produced results. That's how you go form secretary to CEO, you produce good results. I will cut this government down to size and hold it accountable, simplify the tax code, and roll back the regulations that have been spewing out of Washington DC for 50 years. I may not be your dream candidate just yet, but I can assure you I am Hillary Clinton's worst nightmare. And in your heart of hearts you cannot wait to see a debate between Hillary Clinton and Carly Fiorina. I will tell you this. I will beat Hillary Clinton. And with your votes, and your support, and your prayers, I will lead, with the citizens of this great nation, the resurgence of this great nation.

While it might feel uncomfortable that Fiorina is specifically pitting herself against Clinton, it might strike a chord with Republican supporters who approve of how fiercely she has gone after the Democratic frontrunner in the past. Whether Fiorina's performance — and closing statement — will be able to drive her all the way through to that potential debate is yet to be determined, though.