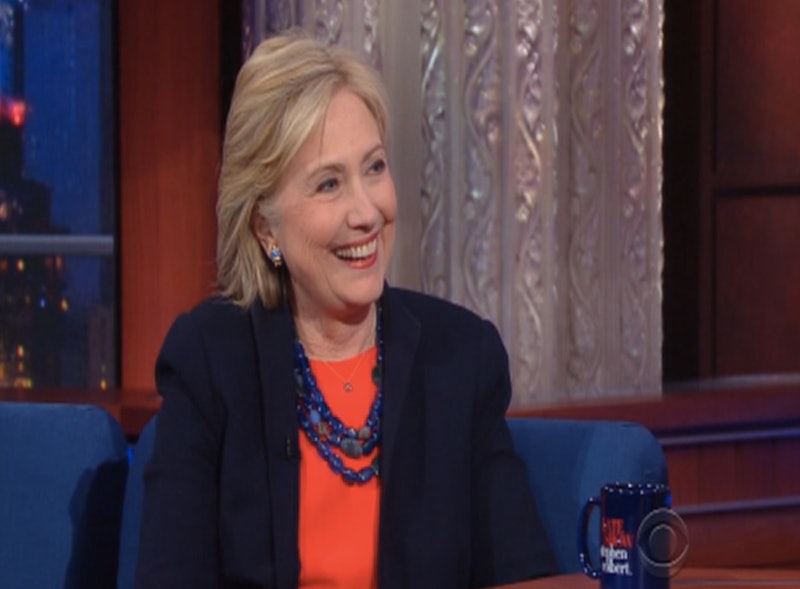 The Democratic frontrunner was in high spirits on Tuesday night, as Hillary Clinton cracked jokes during her Late Show appearance with Stephen Colbert the night before the third GOP debate. Although Clinton has previously appeared as a guest on competitor Jimmy Fallon's The Tonight Show, Tuesday night marked Clinton's first visit to Colbert's newest venture.

While Colbert's interviews tend to be of a more serious variety than Fallon's, the former secretary of state was in a good mood as she joked with the host. Riding high following the first Democratic debate, Clinton has been letting her humor shine through more and more lately — a move that appears to have reverberated with voters, as her poll numbers finally begin to rise as a series of controversies, from Benghazi to Emailgate, have continued to follow her campaign.

That's not to say that the former secretary was all laughs, however. In between naming her favorite TV shows (and hinting at some minor jealousy over former Secretary of State Madeleine Albright's cameo on Madam Secretary), she discussed her opinion on the "too big to fail" banks, as well as reiterating that her presidency would not be a third Obama administration. But some of her best moments of the night came from her quick one-liners — especially those that were subtle digs at her 2016 competitors.

"It's my first visit to the cathedral of Colbert," Clinton joked. When Colbert took over the Late Show helm, the Ed Sullivan theater was renovated for him — and he loves showing it off to new guests.

"I was playing a character who did not care for you," Colbert told Clinton in reference to the conservative alter-ego he embodied on Comedy Central's The Colbert Report. "Well," Clinton responded with a smile, "I can say it now — it was mutual."

On If She Prefers New York Or Chicago Style Pizza

Scared of answering the question that could divide a nation, Clinton declined to state her preference publicly. "I won't tell you personally, but I'll whisper in your ear," Clinton said. "Anyone who's smoking bacon, you can take it." For those who missed the opening monologue, Colbert literally smoked bacon out a pipe earlier in the show during a rant about the correlation between red meat and cancer. Like you do.

While discussing the state of the economy — specifically the one in surplus her husband left behind and the ruined one that President Obama inherited, Clinton got a jab in at the opposing party. "I love when you have Republicans on here and they act like we all have amnesia," Clinton said.

On If The '90s (And Parachute Pants) Are Coming Back

"You'd look good in parachute pants," Clinton told Colbert, who agreed. "I have the hips for them," the host told her.

On Who She Wants To Run Against

When Colbert asked Clinton if she'd rather run against Ben Carson or Donald Trump, the secretary once again preferred to not answer. "I'll gonna leave that to the Republicans," she said.

On Trump And Carson's Electability

"Could you see either of them in office?" Colbert asked Clinton. There was a long pause before she responded, "Well... I can picture them in some office."

Whatever caused Clinton's good mood — be it burn out from the 11-hour Benghazi hearing, her rise in the polls, or her much needed birthday day off — it's a good look on Clinton, who has previously appeared reserved and distant when talking to journalists. And hopefully her humor carries through to the GOP debate — because we can't wait to see what kind of jokes she makes during Wednesday night's showdown.