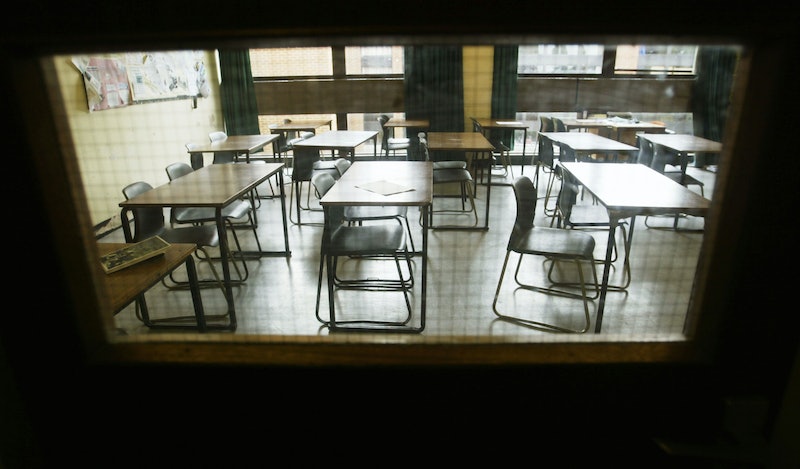 On Monday evening, a video began to permeate the Internet. In it, a young, black, female student in class at Spring Valley High School in Columbia, South Carolina is flipped over while sitting at her school desk, then dragged across the floor by a white, male school resource officer (SRO). On Wednesday, Richland Country Sheriff Leon Lott announced at a press conference that the SRO in question, Deputy Ben Fields, has been fired as a result of the incident. But Lott added that, in his opinion, the whole situation was initiated by the student. Yep, Sheriff Lott said that the student started it.

According to BuzzFeed, Lott's exact words on the matter were, "We must not lose sight that the whole incident was started by this student," after which he added that this did not justify Fields' actions. As if this situation weren't already completely infuriating, unacceptable, and devastating enough, we have yet another old white dude in a position of power telling a young black woman (a minor in high school, at that) that something horrible that happened to her is essentially her own fault. The implication is that If the student hadn't "started it," then maybe she wouldn't have gotten dragged across the room.

How about we as a society just agree that we don't throw unarmed teenagers across the room, regardless of what they did or did not "initiate"? It doesn't matter that the student's noncompliance set off a chain of events that lead to her teacher to call in administration, and for administration to call an SRO (again, because she was merely sitting there and refusing to leave the room where she was being educated on a school day). It's preposterous and entirely unfair to suggest that the resulting actions were somehow the fault of the student. Fields has not yet released a statement about his actions on Monday, or the subsequent fallout. Bustle has reached out to Fields for comment.

Lott conceded that "Fields did not follow proper training and proper procedure when he threw the student across the room," and also fired him for his treatment of the student. I interpret these statements as an admission that Fields was utterly in the wrong, and in the wrong to the extent that it was determined he was not fit for his post as an officer of the law. How can it be that Fields' actions were unjustifiable, but at the same time prompted by the students actions? I'd like to be able to say "I can't believe that it's 2015 and we are still having this conversation," but frankly, I'm not surprised. This is just one in a series of many egregious incidents in which women are told that the violence inflicted upon them is their fault.

Even when firing Fields for what he had done, Lott was unwilling to admit that the student was not at all to blame. Even though the entire country saw a teenager sitting in her desk get flipped over and dragged several feet across the floor, Lott is apparently unable wrap his mind around the idea that the entire event was initiated and executed by Fields himself.