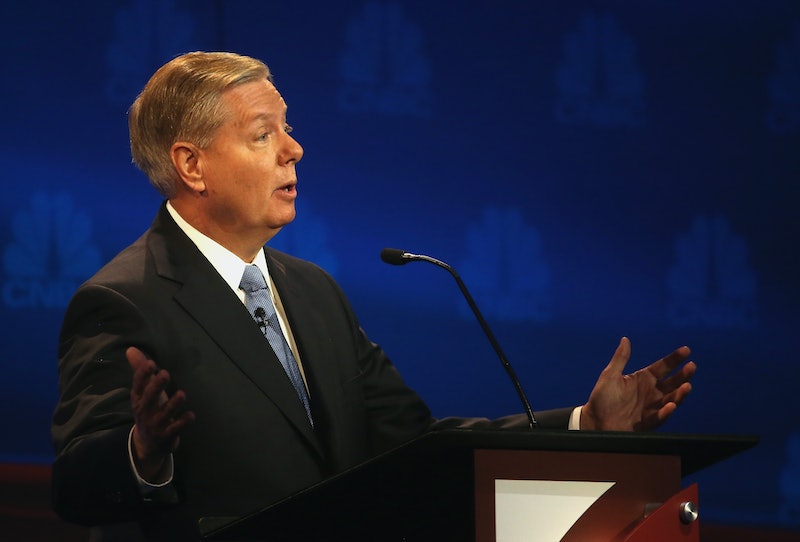 By now we've all realized that he's probably a fun guy, but Lindsey Graham's one liners were the most entertaining part of the third happy hour GOP debate. Not only was the senator willing to crack jokes at his own expense, but he also was more than willing to go on epically long rants that were pretty much the saving grace of an otherwise boring debate.

In previous debates, Graham has done well when he appeals to humor and lets himself go. One of his best moments during the second debate was when he expressed his desire for people to drink more in Washington D.C. It appears that Graham is seeking to distinguish himself in a similar manner in this debate — and some of his one liners so far have been pretty hysterical. And some are just funny because of how out there they are.

When Graham gets on a roll, it's like he just can't stop. Which is bad for the moderators who have to keep time, but good for all the viewers at home who are more than a little bored and just trying to kill time before the main stage debate. But his jokes are on fire, and his one liners are doing pretty well too.

On The Other Party

On Trusting Scientists Who Believe In Climate Change

On Donald Trump And America

On His Football Preferences

On What Kind Of Phone He Has

Although Carly Fiorina was the definite winner of the first debate, Graham truly distinguished himself during the second one, and was considered the winner. His jokes and rants certainly helped him take home that distinction tonight.