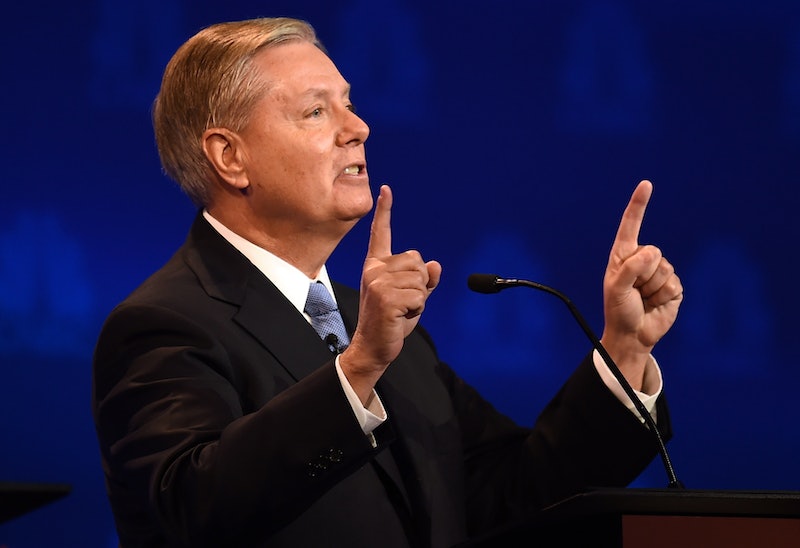 Wednesday night, during the GOP's third undercard debate of the year, Sen. Lindsey Graham was tossed a question by CNBC's debate moderator Carl Quintanilla that made everyone take pause: "Are you in the wrong party's debate?" he asked Graham. Uh, come again? In case you missed it, Quintanilla's question came after listing off a slew of things that Graham has publicly supported — things that just so happen to be supported by many Democrats, too. For one, Quintanilla noted, Lindsey Graham acknowledges that climate change is real — something that experts have been backing up with cold, hard scientific facts for decades now — but apparently, not many Republicans are in agreement on that one. Quintanilla asked the senator:

Sen. Graham, you have said you believe that climate change is real, you've said you accept tax increases as part of a budget deal with Democrats, you've said you would cosponsored a senate immigration bill providing a path to citizenship for those in the country illegally. Are you in the wrong party's debate?

Graham's response? It was pretty on point (at first): "No, I think I'm trying to solve problems that somebody better solve," he quipped back.

Now, you don't have to believe that climate change is real. I have been to the Arctic, I've been to Alaska, I'm not a scientist and I've got the grades to prove it. But I've talked to climatologists of the world, and 90 percent of them are telling me that climate change is real. That we're heating up the planet. I just want a solution that will be good for the economy, but doesn't destroy it.

Soon after, Sen. Graham veered into a long (and ambling) spiel about his thoughts on corporate tax, and immigration, clearly trying to hit all points of Quintanilla's question), but in the end, the points he made about climate change were by far what made viewers stand at attention.

And it's clear just why so many were stunned by this moment: After all, there are some pretty obvious problems with basically telling a candidate his GOP card is revoked because he believes what experts in the field of science are telling him. And isn't that what we expect from our presidents, anyway?