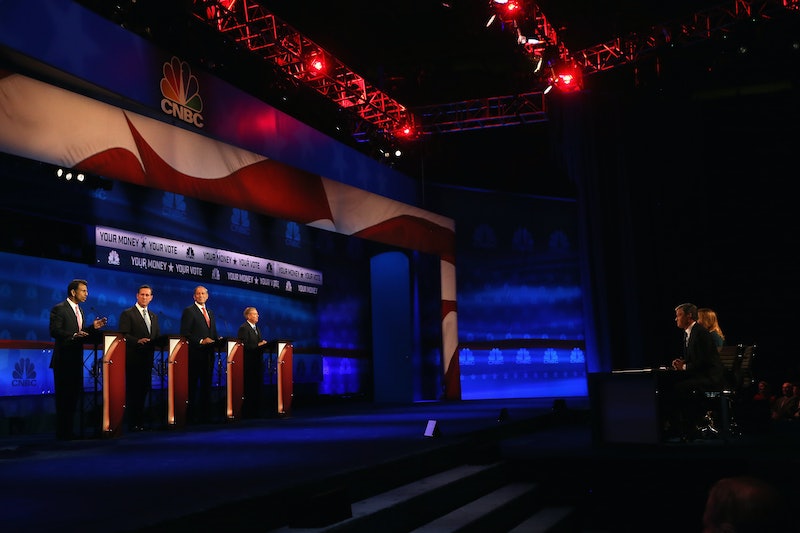 The big event is finally on! Sure, it may have taken a little longer than we all hoped and expected, but at long last, the third GOP presidential debate is underway, airing on CNBC. But the momentary delay did not go unnoticed by the denizens of Twitter, not by a long shot: the third GOP debate started late, and there were some funny tweets about it.

It's about the most nightmarish scenario you can imagine, if you're a political junkie who's getting ready to settle in for a long, high-stakes, potentially hilarious presidential debate — the start time finally rolls around, but hey, why hasn't the debate started? Who are these people on my TV screen? Why am I still listening to Larry Kudlow? Why are people arguing about how liberal the University of Colorado is? What's going on?!

When it was all said and done, the viewing audience at home had to weather an extra 15 minutes or so of CNBC's not-terribly-insightful pre-debate panel, and suffice to say that was a bit too long for a whole lot of people. Here are some of the funniest tweets directed at both CNBC and the candidates themselves as a result of that ill-fated delay.

Incidentally, if you were out there looking for a real reason that the debate started late, you might have thought you'd found an answer from PBS' Jon Ralston, who dropped this little tidbit as the delay was ongoing:

And if so, you'd be sadly mistaken. Ralston revealed that he was making a joke shortly after, and one that apparently fooled quite a few people. And as he observed, that kind of says it all, doesn't it?