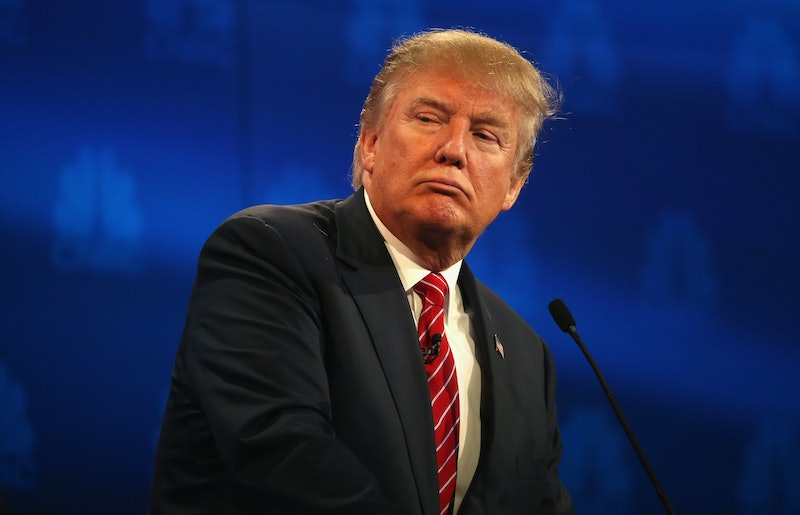 At Wednesday's third CNBC GOP primary debate, Donald Trump winked at someone (or something) off camera after nearly getting into a fist-fight with rival John Kasich over his history in banking and finance, leaving everyone completely creeped out by the unnecessary gesture. Although no one was sure exactly to whom Trump had directed the wink, it was clear that the billionaire real estate mogul was off his game, arguing back and forth with his rivals rather than actually introducing any new ideas. For the GOP front-runner, whose lead over fellow candidate Ben Carson has been slowly dwindling over the past two weeks, it was a major misstep that may have cost him big.

After Kasich touted his record of success as governor of Ohio, Trump swiftly went on the offensive, poking fun at Kasich's poll numbers and remarking about his position on the stage.

"John got lucky with a thing called 'fracking' — he hit oil," said Trump, who then angrily claimed that Kasich had served on the board at Lehman Brothers, which infamously filed for bankruptcy in 2008, one of the largest filings in American history.

Kasich then responded that he had never served on the board at Lehman Brothers, refuting, "I was a banker and I was proud of it and I traveled the country and learned how people make jobs." Trump, not satisfied with Kasich's answer, continued to batter the former governor, this time with ad hominem attacks.

"He was so nice," said Trump, pointing to Kasich. "He was such a nice guy, and then his poll numbers tanked — that’s why he's [standing] on the end." Kasich became visibly angry, arguing that he was finished "listening to [Trump's] nonsense." As the camera cut away, however, Trump seemed to turn and smirk at someone, either offstage or in the audience — though it wasn't clear for whom the gesture was meant.

According to several Twitter users, however, claimed that Trump had been attempting to grab the attention of rival Carson, with whom he's previously been chummy.

"The only thing I'm getting out this debate so far is the sexual tension between Donald Trump and Ben Carson," joked one Twitter user. "Did you see that wink? Chills."

Whether Trump's wink was a last ditch effort to remain at the top of the polls or not was up for debate. Either way, it was unsettling beyond belief.