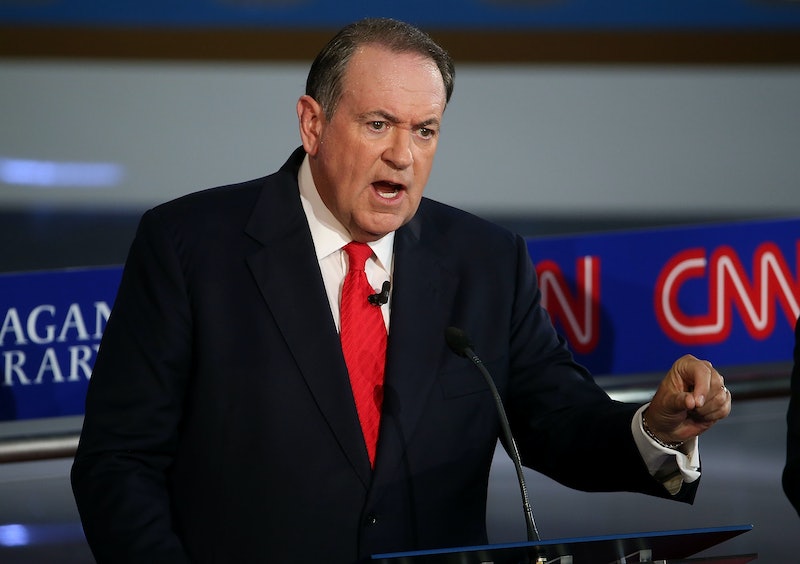 Wednesday night's GOP debate on CNBC began with moderator Carl Quintanilla asking the candidates, job interview style, to tell the audience about their biggest weaknesses. When the question came to Mike Huckabee, he said that he doesn't think he really has any weaknesses, though his wife would be happy to share some of his shortcomings with the crowd. Step aside, Mrs. Huckabee — I'm happy to enlighten readers on why Mike Huckabee's poor judgement and dangerous views would make him a bad choice for president.

Huckabee has been making problematic statements about homosexuality ever since he came onto the national stage. In 2007, USA Today revealed that he once said of homosexuality, it is "an aberrant, unnatural, and sinful lifestyle, and we now know it can pose a dangerous public health risk."

In a 2010 New Yorker profile, Huckabee discussed what he called "the ick factor" of same-sex relationships, and when the Supreme Court ruled to legalize gay marriage in June of 2015, he advocated for resistance to the law, blasphemously likening such discriminatory behavior to that of Martin Luther King Jr. during the civil rights movement. On ABC's The Week, Huckabee said, "I don't think a lot of pastors and Christian schools are going to have a choice ... They either are going to follow God, their conscience, and what they truly believe is what the scripture teaches them, or they will follow civil law." It's no wonder he and Kim Davis get along.

Huckabee is not only a staunch defender of the second amendment, he is a staunch opponent of anyone who would advocate for the gun control and reform that this country has proven itself to so desperately need. One only needs to look as far as Huckabee's own website to see him proudly state that he will "oppose new gun control laws" and "oppose new gun restrictions, registrations, regulations, & mandates."

In his book God, Guns, Grits & Gravy (I repeat, Mike Huckabee did write a book entitled God, Guns, Grits & Gravy), he writes "city slickers who are more afraid of guns than of the criminals who might use them have a serious mental condition rendering them incapable of critical thinking." What Huckabee doesn't appear to realize is that those criminals enacting gun violence are the very Americans who may be most crucially hindered by waiting periods, assault weapon bans, or mandatory background checks.

It is Huckabee, in fact, who is against a woman's right to assert control over her own body, repeatedly likening abortion to the Holocaust and comparing pro-choice activists to slavery supporters.

Huckabee has been a vocal opponent of transgender rights, supporting "bathroom bills" that seek to ban transgender people from using the bathrooms that match their gender identities. He made a joke on the subject in a February speech. "Now I wish that someone told me that when I was in high school that I could have felt like a woman when it came time to take showers in PE. I'm pretty sure that I would have found my feminine side and said, 'Coach, I think I'd rather shower with the girls today.'" Such a flippant comment seeks to delegitimize the experience of transgender people, making it seem as though their gender is a mutable experience and a choice. It is views like these that are at the heart of discrimination against trans people.

So, shortcomings? Huckabee has quite a few. And based on where he stands in the polls, it seems that voters recognize that.