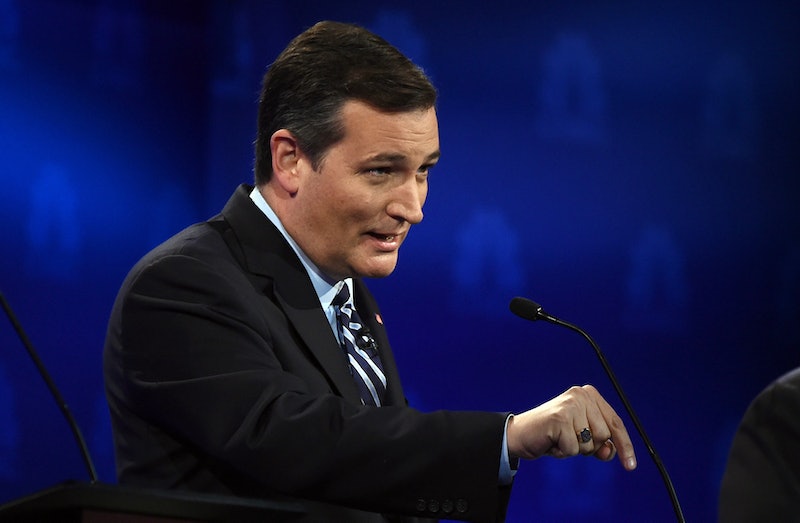 At the third GOP presidential debate, Ted Cruz pulled a Jim Webb, and by that, I mean that when given the chance to talk about policy issues, he instead opted to criticize the debate moderators for not giving him enough time to talk. (It's a complaint that was hard to take seriously, though, because moments earlier, Cruz pointedly avoided answering the question he’d been asked. You can't have it both ways.)

Initially, Cruz was asked whether or not he'd sign a debt ceiling increase as president. Instead of answering that question, Cruz criticized the moderators for asking non-substantive questions. This was an oddly-timed complaint, given that Cruz had just been asked a serious, substantive question.

"You know, let me say something at the outset. The questions that have been asked so far in this debate illustrate why the American people don't trust the media. This is not a cage match," Cruz said to thunderous applause. "How about talking about the substantive issues the people care about?"

Moderator Carl Quintanilla then gave him 30 seconds to answer the question. Cruz continued dodging, taking the rest of his time to attack Democrats.

"Let me be clear," Cruz said. "The men and women on this stage have more ideas, more experience, more common sense than every participant in the Democratic debate. That debate reflected a debate between the Bolsheviks and the Mensheviks. And nobody watching at home believed that any of the moderators had any intention of voting in a Republican primary. The questions that are being asked shouldn't be trying to get people to tear into each other. It should be what are your substantive positions."

At that point, Cruz's 30 seconds were up. Quintanilla, remarking that he "got no answer" on the debt ceiling, attempted to give Rand Paul some speaking time. And that's when Cruz went full Webb.

"You want me to answer that question? I'm happy to answer the question," Cruz said. But Quintanilla was moving on.

"You used your time on something else," Harwood interrupted. Cruz was undeterred.

"You're not interested in an answer," Cruz said, sounding somewhat annoyed.

This back and forth continued, with Cruz repeatedly alleging that the moderators weren't interested in his answer. Ultimately, the moderators prevailed. Cruz never got to tell us how he would deal with a debt ceiling increase.

The performance was reminiscent of former Democratic presidential candidate Webb, whose most notable moment during the Democratic debate was his repeated complaining that he wasn't being given "equal time" to speak. Webb has since dropped out of the race. Maybe Ted Cruz missed the first Dem debate and never saw what happened to a candidate who complains about time.