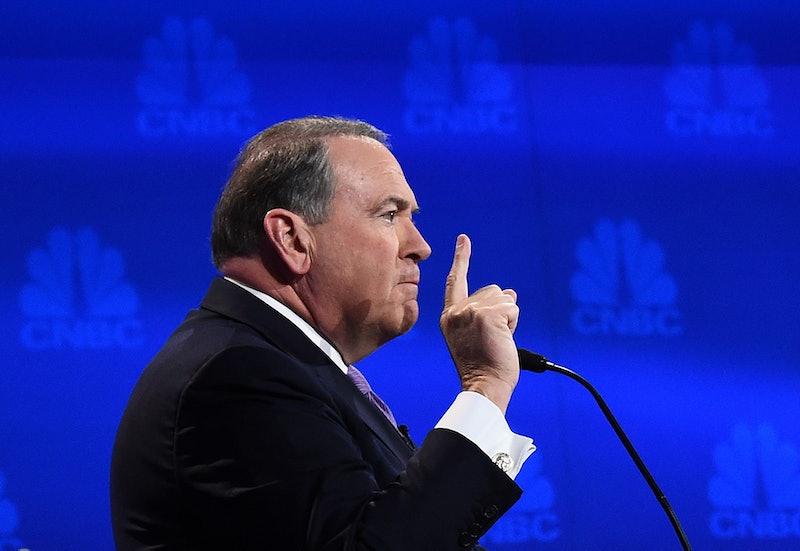 During Wednesday night's Republican presidential debate, there were a fair amount of fireworks — mainly in the form of angry jostling between the participants and CNBC's moderators. But there was also some crossfire between the candidates, and one such exchange left some people wondering if they'd witnessed some nationally televised fat-shaming. Namely, did Mike Huckabee mock Chris Christie with his Krispy Kreme joke, or was it inadvertent?

For those of you who missed it, Huckabee made a rather evocative analogy in a response to Christie that came about midway through the debate. He joked about the idea of a 400-pound man proclaiming that he was about to start a diet as soon as he'd eaten a bag of Krispy Kreme donuts. It was a play for a laugh, and it jumped out at people for obvious reasons. Christie is a visibly heavy man, and he's been the subject of more-or-less constant fat-shaming by rival politicians, comedians, and even media personalities since he became governor of New Jersey back in 2010.

Whether you're talking about his Democratic rival for the governorship back in 2010, or ostensibly liberal comedians with a penchant for hackneyed material, fat jokes about Chris Christie have been a more or less permanent fixture of the political landscape over the last five years.

But it wasn't transparently clear whether Huckabee's statement was intended as a dig at Christie, and it's important to be accurate and measured about things like this. Huckabee had just been complaining about not getting enough time to speak, so it's possible that the line was a pre-planned joke he'd decided to use whenever he got the chance, and it just so happened that Christie was his lead-in.

It's also worth noting that this is an area Huckabee himself has some experience with. His weight has also fluctuated throughout his political career, and he's been the butt of similarly stale fat-shaming jokes because of it. In the years prior to his 2008 presidential campaign, he lost more than 100 pounds after a doctor cautioned him about his obesity. Christie, too, has lost a huge amount of weight over the last couple of years, although this hasn't done much to mute the mockery, even from some political progressives who really ought to know better.

Huckabee likely wasn't trying to sling a fat joke Christie's way, although there's no way to be entirely certain. Regardless of the intent behind the statement, it was nonetheless a rather awkward moment.