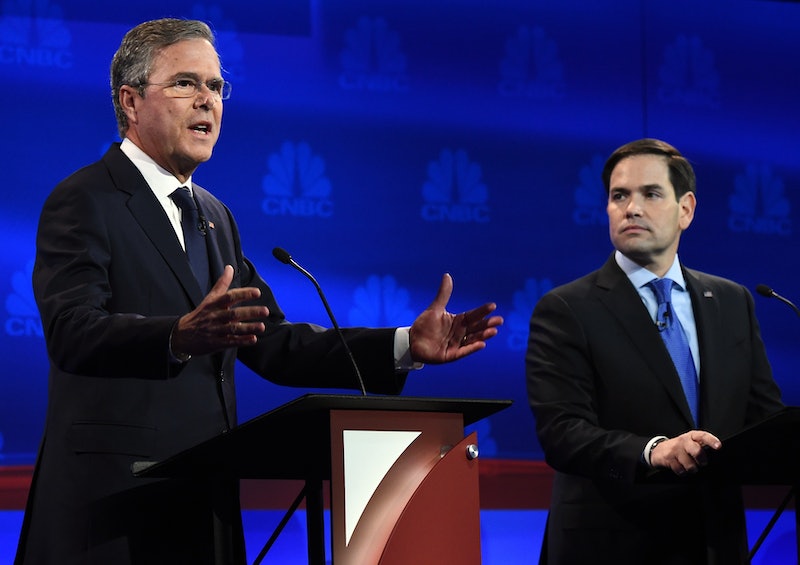 During the third Republican Debate Tuesday night on CNBC, a question put to Florida Sen. Marco Rubio about the number of senate votes he has missed quickly turned into a fight between him and Jeb Bush. If you were watching, you understand how a stream of Bush-Rubio debate fight memes almost immediately ensued. After Rubio answered the question by claiming that the media never attacks democratic candidates for missed votes, Bush told Rubio that he "should be showing up to work." He asked Rubio, "The Senate, what is that, like a French work week? You get like three days where you have to show up?" (Way to recall the conservative disdain for the French, Jeb!) He then suggested that Rubio resign.

Rubio responded, "The only reason why you're [attacking me] now is that we're running for the same position, and someone has convinced you that attacking me is gonna help you." Zing! Twitter lit up with memes in response, from those praising Bush to the majority saying that Rubio came out stronger. Given Bush's performance in the rest of the debate, this was probably one of the former Florida governor's strongest moments, even though consensus seemed to arrive at Rubio as the victor of this particular squabble — and the debate as a whole. Even if Rubio was right that Bush had been advised to go on the attack — it seems plausible enough — it was nice to see Bush, a candidate who has been criticized for his relatively low energy levels, get fired up. Here were some of the best debate memes the Bush Rubio tiff inspired:

The David vs. Goliath GIF

This One Could Apply To Bush's Whole Debate Experience:

Watch the whole showdown below: