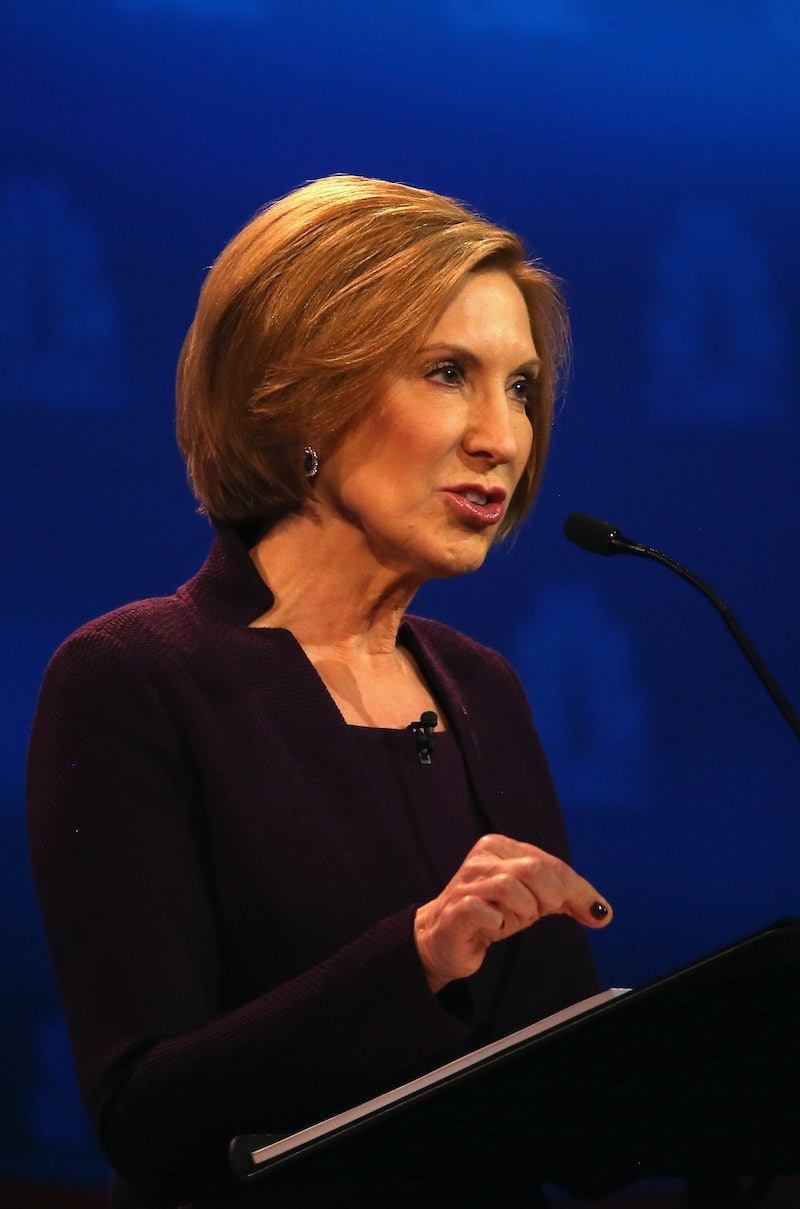 Carly Fiorina made quite the bold statement Wednesday night at the third GOP debate when she slammed Hillary Clinton: "It is the height of hypocrisy for Mrs. Clinton to talk about being the first woman president when every single policy she espouses and every single policy of President Obama has been demonstratively bad for women." She went on, "92 percent of the jobs lost during Barack Obama's first term belonged to women."

Never mind that her "92 percent" figure wasn't even true. Of all the annoying things we heard Wednesday night at the latest Republican rodeo, this has got to be the most annoying. Because there's really nothing more infuriating, to my mind anyway, than women tearing down other women, calling them names, and spreading misinformation.

It's one thing to criticize Clinton's policies, as I myself sometimes enjoy doing. But to call Clinton a hypocrite by hyperbolically claiming that "every single policy" she supports is bad for women — when you yourself are one of the worst presidential candidates when it comes to women's rights? Now that's hypocrisy.

Fiorina said later in Wednesday night's debate that she is Hillary Clinton's "worst nightmare." I can't speak for Hillary, but my worst nightmare is living in a country where I don't even have the right to autonomy over my own body, and where my president thinks that policy qualifies as "good for women."

While Fiorina has said she's a feminist in the past, her grab at making headlines by slamming Hillary as "bad for women" is a classic example of the ways in which women all too often knowingly pit themselves against each other. (Exhibit B: her closing statement telling us that in our "heart of hearts" we cannot wait to see a debate between her and Clinton, as if we're all itching for a good old fashioned cat-fight.)

Perhaps I shouldn't be surprised. Fiorina is, after all, a candidate who's made headlines for her anti-choice sentiments and inflammatory comments about her willingness to shut down the government in order to cut funding to Planned Parenthood. Let's not forget her gem of a quote at the first GOP debate spreading misinformation about the Planned Parenthood video, which claimed to tell the "truth" about donating fetal tissue (before it was widely discredited). Fiorina didn't miss the opportunity to single out Clinton then either.

I dare Hillary Clinton, Barack Obama, watch to these tapes. Watch a fully formed fetus on the table, its heart beating, its legs kicking, while someone says, "We have to keep it alive to harvest its brain." This is about the character of our nation.

That, by the way, was also a statement widely criticized for being misleading.

While Fiorina has said she's a feminist in the past, her grab at making headlines by slamming Hillary as "bad for women" is a classic example of the ways in which women all too often knowingly pit themselves against each other.

By calling every single one of Hillary's policies bad for women, Fiorina took things to a truly, even more absurd level than that moment (which I frankly didn't believe was even possible). To argue that "every single policy" Clinton has espoused is bad for women is something I don't think even Donald Trump could say with a straight face. After all, we're talking about a candidate who's addressing women's rights strategically, and with gusto. Clinton laid out an economic plan specifically addressing the needs of women; proposing equal pay, paid family leave, fair scheduling, affordable childcare, increased minimum wage and sick time. These are all policies that would deeply benefit women.

Fiorina opposes raising the minimum wage. Fiorina is also opposed to the Affordable Care Act, and to the law's provision that guarantees coverage of contraception at no cost to women — a provision which, by the way, would help prevent the abortions she decries. She even opposes enacting legislation that would close the gender pay gap.

As the New Republic's Elizabeth Bruenig put it this summer:

What are the factors that are harming women as a class? Poverty: Six in ten poor adults are women ... Fiorina [has] come out against legislatively raising the minimum wage as well as laws that would mandate equal pay, and has argued that further work requirements be attached to welfare programs. For poor mothers who rely on welfare to make ends meet, what work requirements mean is more time away from their children, more money spent (paradoxically) on daycare, and not much in the way of long-term job prospects. In no way, then, does Fiorina actually support policies that would be beneficial to women on the whole.

And if you think that Fiorina's politics on women's issues are purely about Reaganomics and anti-abortion ideology, think again. She also doesn't even support the movement to put a woman on the $10 bill, as she reminded us at the first GOP debate as well.

I wouldn't change the $10 bill or the $20 bill. I think honestly it's a gesture. Don't think it helps to change our history. What I would think is we ought to recognize that women are not a special interest group. Women are the majority of this nation. We are half the potential of this nation. And this nation will be better off when every woman has the opportunity to live the life she chooses.

Fiorina is big on emphasizing a woman's right to choose — in this way, anyway. And clearly, any woman, especially a politician, should have the choice to define her feminism as she pleases and to criticize other women's politics.

"Feminism began as a rallying cry to empower women," Fiorina said in a speech at the Competitive Enterprise Institute back in June. "But over the years, feminism has devolved into a left-leaning political ideology where women are pitted against men and used as a political weapon to win elections." Fiorina offered this as her definition of feminism instead: "A feminist is a woman who lives the life she chooses ... A woman may choose to have five children and home-school them. She may choose to become a CEO, or run for president."

But in our society, the freedom to make those choices doesn't exist in a vacuum — especially for women. It is dependent on economic and social opportunity; intrinsically linked to our policies addressing education, healthcare, poverty, racism and homophobia, labor, and yes, the right to choose itself. It is because feminists so support a woman's right to choose her own path in life that we tend to lean left. We gravitate to the party that at least promises to afford us equal rights and opportunities so that we can make the choices Fiorina extols.

I too believe that feminism is about choices. So you'll forgive me, Carly, if I choose to reject just about everything else you believe.