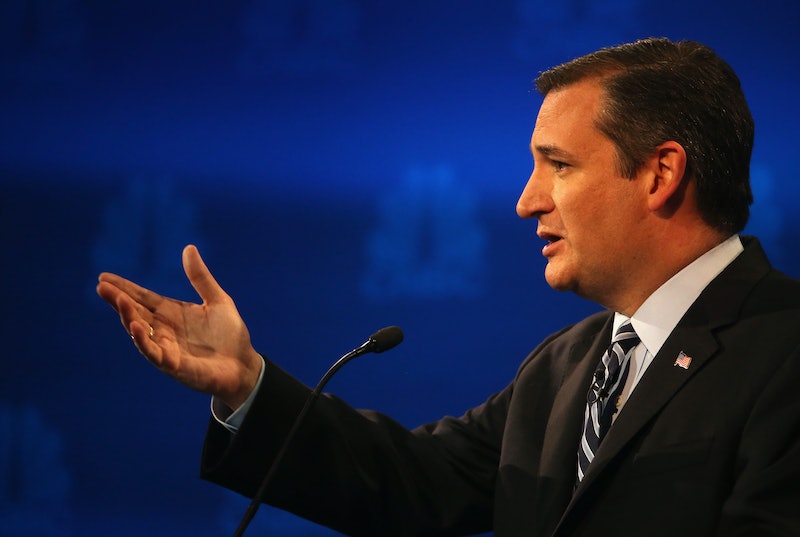 At Wednesday night's GOP debate on CNBC, moderator Becky Quick asked Senator Ted Cruz about the gender wage gap, citing the oft-referenced statistic that women make 77 cents for every dollar a man makes. It's a Census Bureau stat that is discussed regularly when the subject of equal pay comes up, though the validity of this number has been questioned by various organizations. In response to Quick's question, Twitter blew up with people who were not too pleased with the figure quoted.

You might expect a mention of the gender wage gap during a Republican debate to raise controversy only from people who don't believe that such a gap exists — various fact checkers have asserted that when you control for education and career choice, the number is actually more favorable to women. But the discussion that Quick's question prompted was also coming from the other side of the aisle, from people who were hoping that the candidates or moderators would discuss the truth of pay inequality for women of color. Twitter users came out in force, asserting that the popular number does not paint a full picture of the wage gap, as it does not address the fact that this gap is much wider for Black and Hispanic women.

But regardless of particular methodology or flawed math, it is certainly true that wage equality is an issue for women of color, and that it needs to be addressed by the candidates in upcoming debates. While women's issues are sure to be a big subject in 2016, it is the responsibility of moderators, voters, and candidates to make sure that conversation is an intersectional one — not just one focusing on the success and equality of white women.