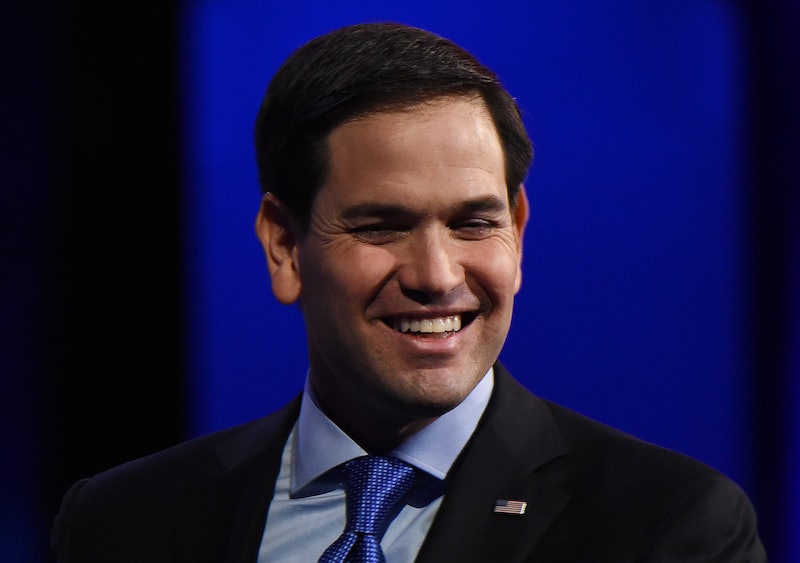 Well, there it is! After a comparatively tidy two hours, the third Republican presidential debate on CNBC came to a close Wednesday. It was a pretty contentious affair, both among the candidates themselves and between the candidates and the moderators. As in all presidential debates, there will be disagreement about just who the winners and losers were, although there's a pretty large consensus that one guy emerged with a little more wind under his sails. Marco Rubio's closing statement was another moment that showed why he won the GOP debate.

Despite there not being a true, slam-dunk, definitive moment that really stood out, there were plenty of strong moments for Rubio throughout the debate, including his casual, withering retort to Jeb Bush that "someone convinced you that attacking me is going to help you." It was a line that perfectly captured so many of the underlying problems with Bush's image, and it completely diffused his criticisms of Rubio's attendance record in the Senate.

More to the point, though, Rubio's polished, confident performance may have made him the winner by default. Plenty of people had stumbles and awkward moments, but all in all, nothing seemed to stick to him. He even came out looking strong on the persistent questions and criticisms of his personal financial history.

Here's how he decided to wrap up the whole thing:

You know, America doesn't owe me anything. I have a debt to America I'll never repay. This isn't just the country I was born in, this is the nation that literally changed the history of my family. My parents in this country were able to give me the chance to do all the things they never did. We call that the American Dream, although, it's built on the universal dream of a better life.

The fact that it's happened for so many people here throughout our history, that's what makes us special. But, now for millions of Americans, it's slipping away. And, we have a government and leaders in government that are completely out of touch, and that's why I'm running for president. Because we can't just save the American Dream, we can expand it to reach more people, and change more lives than ever before.

Sure, it wasn't the most attention-grabbing or bombastic closing statement. (That crazy title undoubtedly went to Donald Trump, who used his final moments to brag about forcing CNBC to cut the length of the debate.) But people seemed to appreciate it. And Rubio's all-around performance afforded him the ease of playing it safe at the end. He touched on his family's immigrant history and touched on themes of American promise, which is basically the biggest biographical theme of his campaign.