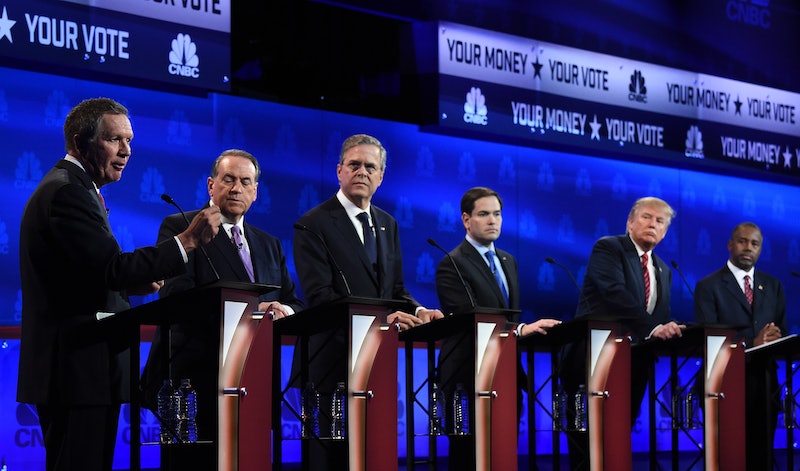 Wednesday's third debate among candidates for the Republican Party's presidential nomination seemed shorter and slightly less dramatic than previous showdowns. But that didn't stop some GOPers from standing out in the crowd. As the primaries grow closer and closer, the debates have become the ultimate proving ground for the large field of candidates. In Wednesday night's debate in particular, performance didn't necessarily seem to match up with polls — in large part because out of all of the candidates, Carly Fiorina spoke the most, while Donald Trump fell to the middle of the back and Ben Carson fell second from the bottom.

Marco Rubio pretty much stole the show in Colorado, deflecting attacks from his "friend" Jeb Bush and highlighting his family's heritage in a powerful way. But Rubio only came out second in speaking time. According to NPR, Fiorina topped the clock with just over 10 and a half minutes of speaking time. Rubio followed with just over 10 minutes. Clearly, it was a good night for both Fiorina and Rubio, but the candidates at the top of the polls pulled off rather lackluster debate performances, particularly when you look at time. Both Carson and Trump, who stand at first and second in the most recent polls, saw their speaking times significantly cut since the last debate.

In the second Republican primary debate, which was held in September and organized by CNN, Trump spoke the most — for more than 19 minutes, believe it or not. It's important to remember that CNN's debate was about an hour longer than CNBC's debate. Even still, Trump fell from the first spot on the clock, to fourth place.

For her part, Fiorina has remained a powerful presence. In the second debate, she followed behind Trump and Jeb Bush in speaking time, with just about 13 minutes under her belt. This time around, she topped the chart. Interestingly enough, though, she hasn't maintained a significant standing in the polls. The same goes for Rubio. He improved his time significantly from the last debate to Wednesday's, but it's unclear whether that will be enough to boost him into a serious competition with the far-and-away leaders, Carson and Trump.

When it comes to debate speaking time, all of the candidates are vying for as big of a chunk as possible. However, it was nice to see a shorter debate overall this time — viewers and candidates alike struggled with CNN's three-hour debate back in September. At this point, only time will tell if a bigger piece of the clock translates to a bump in the polls for Rubio or Fiorina.