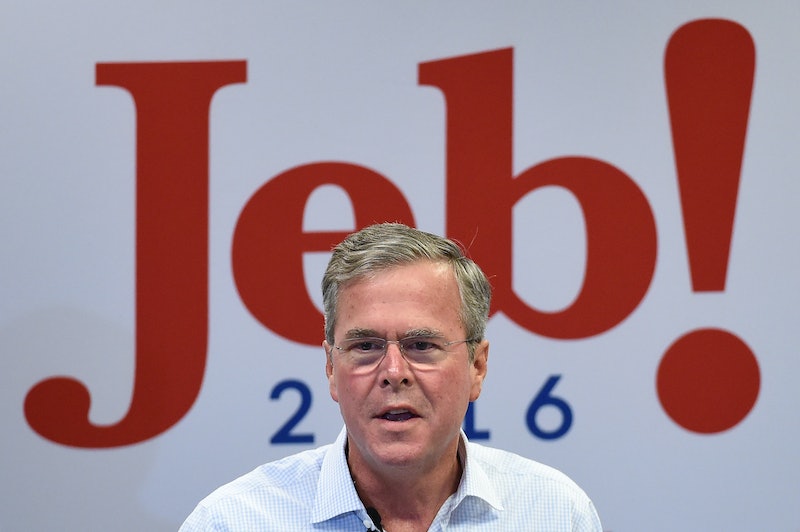 When the story of the 2016 campaign is written, Wednesday's Republican primary debate may well go down as the moment Jeb Bush’s presidential aspirations died. The former Florida governor needed a knockout performance more than any of the other candidates on the stage, and he delivered the opposite. The most memorable moment of the night came when Bush found himself on the losing end of an argument with Marco Rubio, and it was all downhill from there. By the time the debate was over, Bush was being mocked on social media for coughing during his closing statement. Stick a fork in him, folks. Jeb is done — exclamation point.

The stakes were high when Bush stepped onto the stage in Colorado. His persistently low poll numbers, lackluster performance in earlier debates, and penchant for saying foolish things had dogged his campaign for months. Shortly before the debate, Bush was forced to slash campaign staff and salaries — always an ominous sign for a presidential campaign — and according to The Washington Post, some of his donors had threatened to turn off the money faucet if Bush failed to shine tonight.

No, Bush did not shine tonight. He had no breakout moments, landed no solid attacks on any of his opponents, and said nothing to distinguish himself from his competition. As in the first two debates, he came across as irritated and tired, rarely smiled, and often ran out of steam mid-sentence. Like a student being forced to give a class presentation, Bush didn’t look like he wanted to be there. And the one moment that could have potentially been a boon to his candidacy backfired spectacularly.

Early in the debate, the moderators asked Rubio about his poor attendance in the U.S. Senate since announcing his campaign. Rubio handled the question deftly, pointing out that sitting senators often miss votes when running for president, and cited John Kerry and John McCain as examples. The audience ate it up — and then Bush stepped in to have a word.

“Marco, when you signed up for this, this was a six-year term, and you should be showing up to work,” said Bush, sounding briefly like a father scolding a delinquent child. “I mean, literally, the Senate? What is it, like a French work week? You get like three days where you have to show up? You can campaign. Or just resign, and let somebody else take the job.”

It wasn’t an awful retort. But Rubio was ready with a far better one. “Over the last few weeks, I’ve listened to Jeb as he walked around the country and said that you’re modeling your campaign after John McCain,” Rubio said. “You know how many votes John McCain missed when he was carrying out that furious comeback that you’re now modeling after?”

Bush replied meekly that McCain “wasn’t my Senator,” and then Rubio put the nail in Bush’s coffin. “I don’t remember you ever complaining about John McCain’s vote record. The only reason why you’re doing it now is because we’re running for the same position, and someone has convinced you that attacking me is going to help you.”

Check and mate. The crowd loved it, the moderators moved on, and the rest of Bush’s performance was rendered irrelevant. By the time the debate was over, he had spent less time talking than every candidate on the stage, other than Rand Paul. The fallout was swift: According to BuzzFeed’s McKay Coppins, Rubio’s campaign started getting calls from Bush donors before the end of the night.

If tonight’s debate does prove to be the death knell for Bush’s campaign, it’s only because the rest of his White House bid has been so uniformly terrible. Aside from raising money from rich people — which, granted, is no small feat — Bush hasn’t demonstrated any political ability since entering the race in June. He frequently says the wrong thing at the wrong time, and starts arguments that he shouldn’t. He’s been completely unable to energize grassroots conservatives. He isn’t a compelling speaker, hasn’t excelled during the debates, and is utterly incapable of dealing with the juggernaut that is Donald Trump.

Bush’s downfall may be shocking to some; most notably his donors. After all, he entered the race as the establishment favorite, and was supposed to coast past everyone else and snatch the party's nomination with ease. But that didn't happen, and in reality, his decline shouldn’t be a surprise. Bush has been a known quantity for over 20 years, and his shortcomings as a politician have been painfully obvious for about as long. Wednesday was the culmination of those weaknesses, and the termination of Bush’s campaign is the only logical conclusion. It may not happen today, and it may not happen tomorrow, but make no mistake: Jeb Bush is finished.