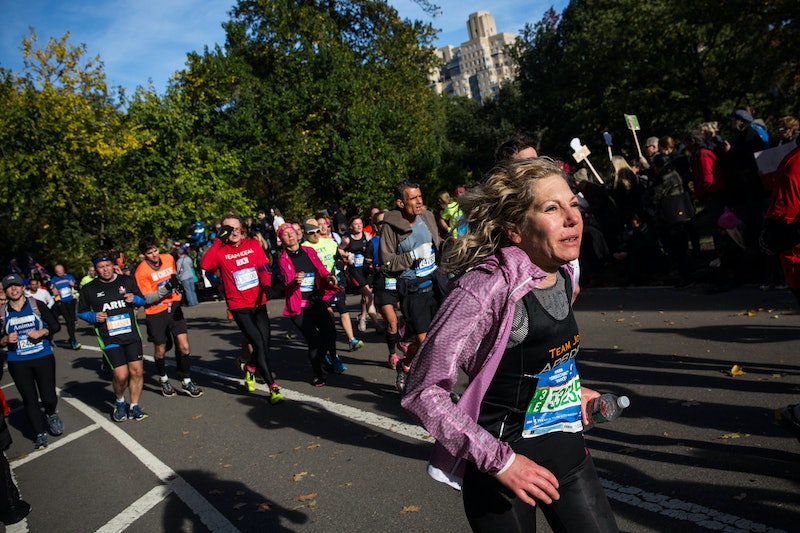 The average runner may take just four hours and 35 minutes to complete the New York City Marathon, but don't worry if you're a tiny bit slower than average. Even more than a little. The last wave of runners have eight and a half hours if they need it; the marathon officially ends at 7:30 p.m. ET. Marathon runners come in all ages and fitness levels nowadays. Last year's female winner, Mary Keitany, 32 from Kenya, finished in just 2:25. Others are a little slower to make it through the five boroughs. Then 91-year-old Margaret Hagerty from North Carolina finished in 9:50 in 2014's race. Keitany probably was already out celebrating, or maybe taking a well-deserved nap.

Both women can say they ran the NYC marathon, show off their medals and brag to their friends and family. Or can they? In years past, slow finishes have driven hard-core runners crazy. In 2009, The New York Times ran an article titled "Plodders Have a Pace, but Is It in a Marathon?" Ouch. Some of the hard-core runners that were interviewed complained that slow runners shouldn't get credit for "running" a marathon when they walk every other mile. Maybe they don't "run" a marathon but "participate." "How low is the bar?" one cross country coach asked.

This March, a woman in London was pulled out of a race after a mile and a half for being too slow because the race "wasn't for people like her." In her account the race marshals said they weren't going to stay out as long as the race would have taken her. Her first mile took her about 12 minutes — not all that slow!

Some races have more difficult qualifying times. The Boston Marathon requires a qualifying time ranging from three hours and five minutes to five hours and 25 minutes, depending on age and sex. But that keeps the number of participants down. The NYC Marathon has qualifying times too but most runners enter the race through a lottery. The bigger the marathon — some slower runners surely make up the 50,000 finishers in New York — the more revenue for the city's local businesses, hotels and restaurants.

Plus there, are always those who are happy to finish slowly. Guinness Book of World Records aspirants have finished marathons on stilts, playing in a marching band, and wearing bomb disposal suits. Running a marathon on crutches, like a runner in the 2007 London Marathon did, has to be rough.

Dropping out of the race is an option too. Look for a volunteer with an orange hat operating a ham radio. They're always at a medic tent.

If like most of us, you're just watching. You can stream the event online. Starting times are staggered throughout the morning.

Having finished last in quite a number of high school cross country races (all but one), I wish the slow runners success.