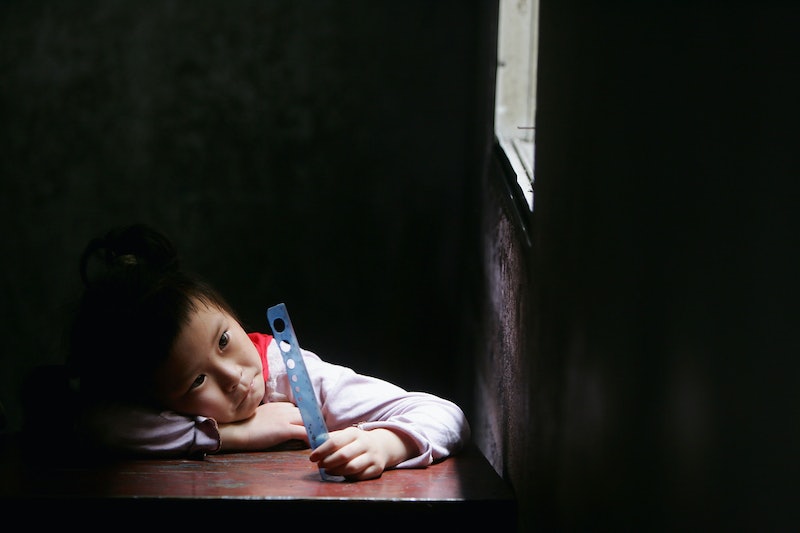 China will end its one-child policy after 35 years of the model, the state-run Xinhua news agency reported Thursday, according to CNN. But the policy hasn't been so effective, and the state has resorted to heavy fines for couples who break the policy, abortions, and forced sterilizations, according to CNN. What effects will lifting the one-child policy have? Economists think that the change may have come too late, and it's unclear what effects the change could have on relationships.

It's undoubtedly clear that changing the policy will first have an immediate effect on women, especially those who live in places like Rudong, a county in eastern Jiangsu Province. Rudong's family planning officials policed women and families with "unrivaled zeal" after the policy went into effect in 1979, according to the BBC. One retired senior official who worked in Rudong gave an interview to local Chinese state media where he described "hunting down women," taking them to hospitals, and guarding them during forced abortions, according to the BBC.

There were also people employed by the state who would "monitor wombs" with portable ultrasound devices and record women's menstrual cycles to make sure no one was hiding a fetus from the government, according to the BBC. And, sadly, Rudong was so great at policy women's fertility that it became a national model.

The new policy will help the working population grow, but social scientists are not sure by how much because many families are now discouraged from raising more children as a result of the high costs associated with rearing children in such a competitive country. Mu Guangzong, a professor of demography at Peking University, described the cyclical problem to the Times: many couples can't afford to raise more children, but, in order for the economy to grow, the labor force needs to grow. The problems feed each other:

I don’t think a lot of parents would act on it because the economic pressure of raising children is very high in China. The birthrate in China is low and its population is aging quickly, so from the policy point of view, it’s a good thing as it will help combat a shortage of labor force in the future. But many parents simply don’t have the economic conditions to raise more children.

Economists think it might be too late for this policy change to solve China's labor crisis, especially since people in the country are marrying later and some aren't having children at all, according to the WSJ. This means the change could also be unlikely to solve other problems in spouses relationships, like the fact that their only children are often left to care for them once they age. But the same costs described above illustrate why couples are discouraged from having anymore children. Even in places like Rudong, where the government is offering cash grants of 5,000 yuan (about $790), those cash grants are not enough given the financial, life-long demands of raising children, according to the BBC.

In May, about 1.45 million couples had applied to have a second child under the 2013 relaxation of China's one-child policy, but that's only 12 percent of the total number of eligible couples, according to the Times. That number was disappointing to demographers who were hoping that the relaxation would begin to help counteract China's growing elderly population and shrinking workforce. Peng Xizhe, a population professor at Fudan University, told the Washington Post that the economic growth is hard to predict, but any positive growth would definitely be slow:

The reform will slightly slow down China’s ageing society but it won’t reverse it. It will ease the labor shortage in the long term, but in the short term it may increase the shortage because more women might stop work to give birth.

The change may have come too late, but at least now couples have the option to grow their families a little.