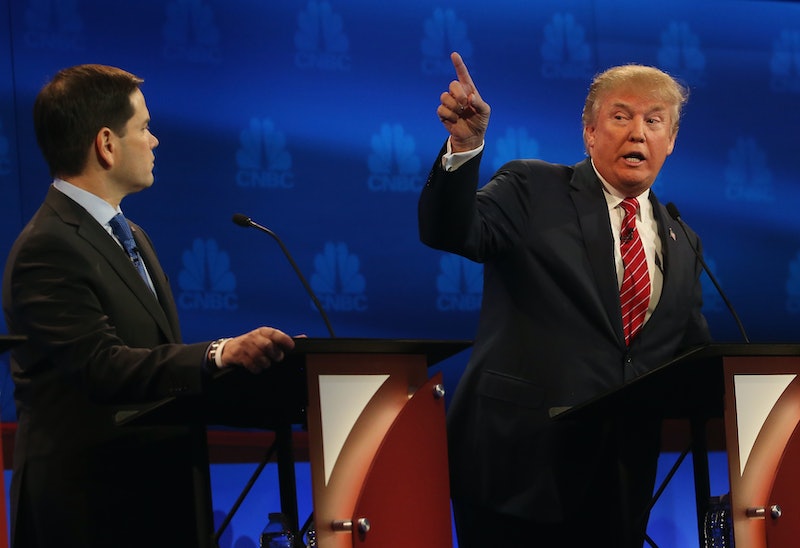 No one can beat the Donald. At least, that's what he'd like us to think. Donald Trump went on a self-congratulatory rampage this morning on Twitter retweeting seemingly every well-wisher and linking to online polls that named him the winner. That's after Trump claimed victory Wednesday night speaking to reporters following the debate. But did he win? Well, not according to people who are not Donald Trump, it has to be said.

Politico's Ben Schreckinger called him the "incredible shrinking candidate." With only one attack on a fellow candidate and falling to the bottom half in speaking time, Schreckinger said he's attempting to maintain his lead in the polls by staying out of more controversies. But that means he can't remain the center of attention, which propelled him to the top of the polls in the first place.

I'm not sure who "they all" are. Perhaps his fans on Twitter. He did win the CNBC website's poll. But, as the disclaimer says: "This is an informal poll. Results are not scientific and may not necessarily reflect the opinions of the public as a whole." CNBC's Jeff Cox called him "Truth-Challenged Trump" and said his one-liners seemed familiar. Read: stale.

One of the other online polls he linked to had two possible responses to the question "Did you like the GOP Debate?": "I loved it. Trump won." and "Too bad, Trump lost." Any poli-sci majors out there cringing? You should be.

His performance was sure to draw scrutiny after appearing warn out at the end of the second debate. He forced CNBC to shorten the third debate to two hours. This time around, “There was no fade. There was no fade," Trump told reporters after the debate.

Maybe that's true, but he definitely didn't reach the heights of the first debate, grabbing the media by the neck and dragging them from crazy to crazier. Perhaps it's a good strategy for most frontrunners, but given that his campaign has mostly been based on largess and not a well-thought-out policy foundation, he probably needs to worry.

His campaign's a house of cards with an eccentric personality and media attention holding it together. Should either fade, so will Trump 2016.