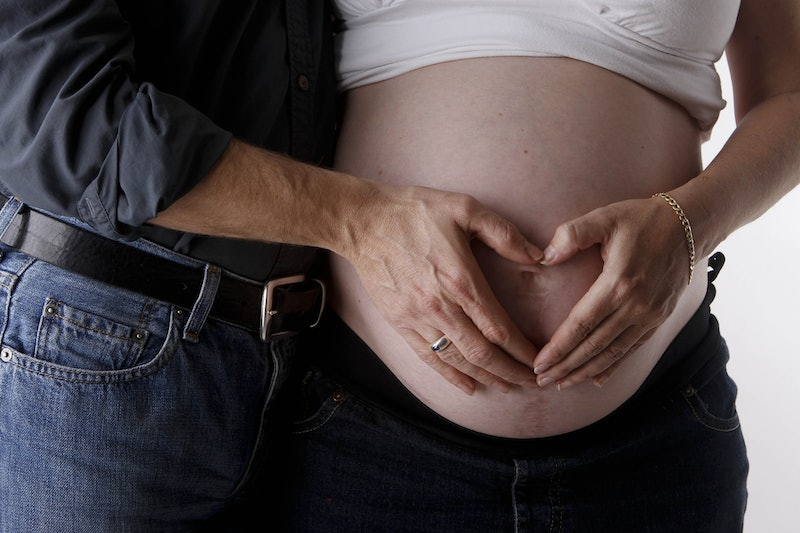 For years, pregnant women have been told they shouldn't consume food during labor; and, at many hospitals, are actually prohibited from eating once admitted. Sure, they are allowed to suck on ice chips — and lollipops, if they are lucky — but nothing else can pass through their lips until their kiddo passes through... well, you know where. But a new study from the American Society of Anesthesiologists shows that women may actually benefit from eating during labor. Go freakin' figure!

Researchers analyzed 385 studies (published 1990 or later) that focused on women who gave birth in a hospital. They found that the energy and caloric demands of laboring women are similar to those of marathon runners, and without adequate nutrition (i.e. by not allowing these women to eat for 10, 20, and even 30 hours at a time) their bodies will begin feeding off itself, using fat as an energy source, and potentially reducing uterine contractions. It could also lead to a longer labor and lower health scores in newborns. What's more, the study suggest that fasting during labor can cause emotional stress and contribute to fetal distress.

If none of this sounds surprising, I am right there with you. (I was sneaking granola bars in the corner of my Labor & Delivery room 12 hours into my own daughter's birth.) So why the heck were we told we couldn't eat in the first place? Well, there's some interesting backstory there.

Traditionally, women were told to avoid eating or drinking during labor due to concerns they may aspirate — or inhale liquid or food into their lungs — while anesthetized. However, improvements in anesthesia care have made pain control safer, reducing risks related to eating and making this problem highly unlikely. (In the U.S., there was only one case of aspiration between 2005 and 2013, but the patient had a complicated labor — according to the American Society of Anesthesiology’s Closed Claims Project database.)

That said, Erin Sprout, BN, a co-author of the study and medical student at Memorial University, noted that: "Certain factors [do] increase a laboring patient’s risk of aspiration," and these risks, which include eclampsia, pre-eclampsia, obesity and the use of opioids to manage labor pain, can "outweigh the risks of withholding nutrition.” However, in most cases a light meal (think fruit, toast, or a small soup or sandwich) would help women meet their nutritional needs, which could potentially shorten labor and assist them when it comes time to finally deliver.

So if you have an appetite — especially 10+ hours deep into labor — toss the ice chips aside and ask for an apple or slab of bread slathered in butter because you've earned it, mama.