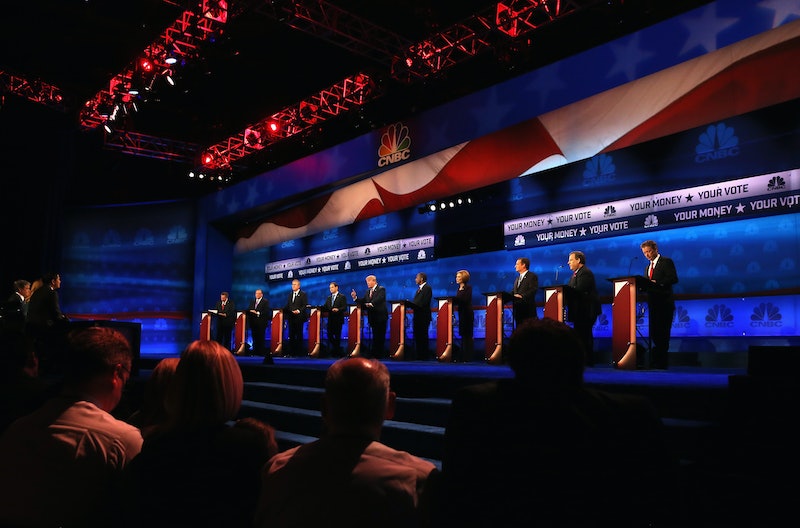 In utterly unsurprising news, the GOP presidential candidates were aggressive during Wednesday night's third Republican debate, which was hosted by CNBC in Boulder, Colorado. This time, instead of just laying in to their fellow candidates, the Republican candidates also decided to team up against the debate's moderators and the "mainstream media." It was intense. Over and over, the candidates lambasted the moderators, who frankly struggled to stay in control of the debate in the face of the indignant candidates, and criticized the media for favoring their Democratic counterparts and portraying the Republicans in the race unfairly. It's probably true that some questions posed during presidential debates are ridiculous and could be better — a move I'm inclined to think is to boost ratings, which gains viewership for the candidates — that's fair. But do the Republicans really hate these unfair questions as much as they contend?

I'd argue that no, they don't, and in fact the GOP candidates only stand to benefit from questions that seem unfair, that they don't like, or that challenges their platform. To me, it appeared that the candidates were eating it up and playing to the crowd, using questions they didn't like as a means of asserting authority and playing into the disdain that the GOP voting base holds for mainstream media.

At times, it almost seemed like they were hoping to be asked something that seemed unfair so that they could seize the opportunity to criticize the moderators and take complete control of the discourse; this angle gives the candidates a means of dismissing questions without having to argue a real case for themselves.

Donald Trump even tweeted before the debate began that he was sure the debate was going to be unfair, suggesting that pretending to be the victim of unfair questioning and then using it to his advantage is one of Trump's many campaign strategies. If he sets himself up to be the victim, then appeals to the crowd by attacking the moderators ("the mainstream media") and then avoids the question itself by labeling it "unfair," he only looks stronger — like he's overcome something during the debate.

Trump has complained about unfair treatment from the media and particularly from debate moderators since the beginning (remember that Megyn Kelly incident?), but has also declared himself the winner of all three debates so far. Curious.

It wasn't just Trump who was taking advantage of the unfair media angle; Marco Rubio was eating it up as well. Rubio is an expert is keeping his cool and keeping his answers straightforward and authoritative, rarely cracking when he is supposedly upset, nor when he receives applause from the crowd. Several times Rubio attacked the media, calling the mainstream press the DNC's ultimate Super PAC, and accusing moderators of posing questions based on "a litany of discredited attacks" that have been presented by the Democrats and his other opponents, stating stone-faced that he would refuse to respond to them. As far as I could tell, the opportunity to make statements like these on national television in a calm, cool, and in-control demeanor only helped Rubio.

The others got some great screen time out of this as well, including Ben Carson (the crowd booed when the moderators asked about his vetting process), and Ted Cruz (who attacked moderator John Harwood, accusing him of not wanting to hear answers but just wanting to hurl insults), and Chris Christie (who mocked the conversation turning to fantasy sports). And the crowd was loving it. The whole thing gives the candidates an ego boost, makes them seem in control, and probably does more good than harm to their image among GOP voters.

Cruz even tweeted results from a focus group that demonstrated just how much GOP voters distrust the media, showing his focus group ratings going to 98 percent during the debate specifically because of his attacks on the media. Seems like a boost someone riding a 10 percent approval rating in a recent Iowa poll would find very attractive.

The main problem is that the candidates were appealing to a fallacy called "playing to the crowd" (something to keep an eye out for in any debate). Playing to the crowd is when someone poses an argument or response that isn't necessarily grounded in logic, but rather appeals to popular opinion, and thus wins them favor. It's a cheap and easy tactic that many of those on the stage Wednesday night utilized.

That said, for the most part, the appeal to this fallacy probably doesn't really harm the candidates, either — they're giving the people what they want, after all. So complain as they might about unfair questioning and media that lean towards Democrats, the GOP candidates had a lot to gain from these assertions during their third debate. When you boil it down, this might be a tactic that has short-term benefits, but I wonder how presidential a candidate can appear when their strongest suit is flinging zingers at debate moderators.