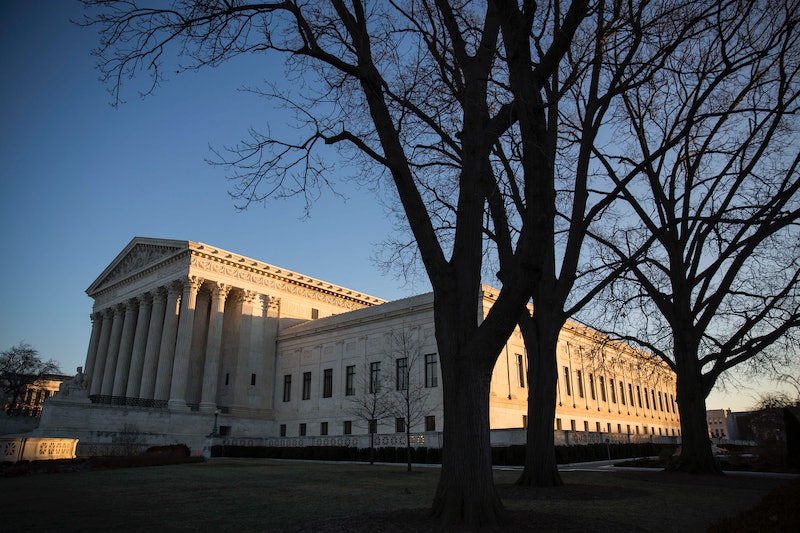 Texas' anti-abortion law, HB2, has already forced more than half of the state's abortion and women's healthcare clinics to close their doors, according to CNN. The way the state government instituted the law — in stages over time — shows just how restrictive the new policy was. Just after the first two stages of the new law were enforced, the more than 40 abortion providers in Texas dwindled down to 18, according to CNN. The last set of provisions for HB2 were scheduled to go into effect Thursday, but the Supreme Court issued a stay on the law in June, according to Texas Monthly. When will the Supreme Court rule on HB2? It's unclear, but the state has continued to sneakily curtail or invade the rights of women since the Court issued the stay.

As of last fall, all abortion clinics in Texas were required to comply with ambulatory surgical center requirements, according to Texas Monthly. Those upgrades cost $1 million or more, according to NPR. Just this requirement closed more than half of the clinics in Texas, according to CNN. The next round of provisions, which was scheduled to go into effect Thursday prior to the Court's stay, would have closed all but 10 of the abortion clinics in Texas. The Supreme Court is currently hearing arguments on another case, and Whole Woman's Health v. Cole, the case challenging Texas' restrictions, is not on the Court's schedule for the next three months. That doesn't the Court has decided not to hear the case, it's just unclear when it will happen. The stay will remain in effect until the Court decides for sure.

Which HB2 Provisions Are In Contest?

The provisions on which the Supreme Court could hear arguments would have, first, required clinics to have admitting privileges at a hospital within 30 miles of the clinic (but, there was no incentive provided to hospitals to do this). The second round of provisions also outlawed 20 week abortions unless the abortion was necessary to “avert the woman’s death or a serious risk of substantial and irreversible physical impairment of a major bodily function, other than a psychological condition.” according to Fund Texas Choice.

What's Texas Doing In The Meantime?

Because of the confusion surrounding which Texas clinics have closed their doors, two clinics in El Paso, Texas, have reported that women appear to be crossing the border for do-it-yourself abortions, according to the El Paso Times. The last round of provisions was first enforced and then stayed by federal courts, which forced one of El Paso's two clinics to close its doors, open, close again, and then open after the stay. Gloria Martinez of Hilltop Women’s Reproductive Clinic in El Paso told the El Paso Times that about 15 women have called the clinic and a sister facility in Santa Teresa, New Mexico, complaining of infections they had after taking drugs from Mexican pharmacies in attempts to induce abortions.

The women said they bought a drug called cytotec, which is also known as misoprostol. In the U.S., medicated abortions are the most common to end abortion early in pregnancies. To do this, doctors often administer mifepristone, first, to end a pregnancy. Then, they administer misoprostol to expel the fetus from the body. Martinez told the El Paso Times that taking misoprostol alone is dangerous, because sometimes it will successfully end a pregnancy. But, at other times, it can fail and then surgery is needed.

"So now people are crossing the border and buying stuff, and calling us and asking if we can treat an infection," Martinez told the El Paso Times.

The reason abortion clinics often don't have admitting privileges at a hospital is because the complication rate of abortions is so low. But now that women are crossing the border and doing things unsafely, the need for hospitals is increasing, which illustrates the dangerous misconceptions surrounding abortion in Texas, according to the El Paso Times.

Most recently, just after Texas Gov. Greg Abbott announced he was ending Medicaid funding for Planned Parenthood clinics in Texas, state officials showed up at clinic doors requesting thousands of patient documents concerning patients billed to Medicaid who had had abortions where any part of the fetus was removed and preserved for research use, according to the New York Times. Planned Parenthood officials have said the move is a total violation of patient confidentiality, but there's little they can do when the state is claiming that it's investigating is warranted.

Pro-choice organizations say that because Texas can't make abortion illegal, it's doing everything in its power to make it inaccessible.