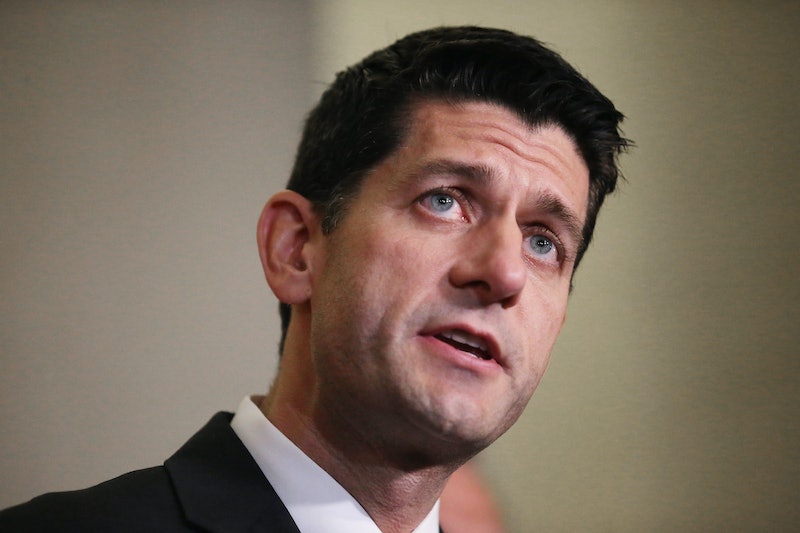 Paul Ryan was officially voted in as the speaker of the House of Representatives on Thursday morning after House Republicans nominated him for the position Wednesday. The Wisconsin congressman is as Republican as they come and, as you might remember, ran as Mitt Romney's potential vice president in 2012. Much of the talk leading up to his election was about reuniting the Republican party and fixing the economy, but as speaker of the House, Ryan will have a lot of power over every political subject — including women's issues. Unfortunately, because Paul Ryan's views on women's issues are so conservative, he probably won't be a strong ally for American women in Congress.

Ryan's stances on women's issues aren't just right-leaning, they're so far out in right field that you can't even see them from where you stand. When he was Romney's running mate in 2012, Ryan's record on women's issues in Congress was thoroughly criticized, and his addition made Romney's campaign seem much more anti-woman. Most Republican politicians oppose abortion and federal funding for Planned Parenthood, but Ryan is against gender equality on multiple fronts.

Here's where Ryan stands on the health and family issues important to many American women.

Before he was officially elected speaker of the House, Ryan said that he "cannot and will not" give up his family time for the position; however, he doesn't support paid family leave for every American. He voted against the Federal Employees Paid Parental Leave Act in 2009, which would have allowed federal employees to use paid leave as paid parental leave. Ryan's solution to family leave was the Working Families Flexibility Act that he co-sponsored — instead of just offering employees paid family leave, the Working Families Flexibility Act would have given private-sector workers paid time off only after they had worked overtime. The chair of Iowa's Democratic Party, Dr. Andy McGuire, said in a DNC conference call Thursday: "You shouldn’t have to be the speaker of the House to spend time with your family."

Ryan not only opposes abortion, but he also doesn't think victims of rape should be able to use Medicaid for abortion or women in the military should be able to have an abortion at a military hospital. These are a few of the anti-abortion bills he's either co-sponsored or voted on in Congress:

No Taxpayer Funding for Abortion Act: Ryan co-sponsored this bill that would prohibit Medicaid from covering abortion procedures, even in cases of rape and incest.

Davis-Harman-Sanchez Amendment to the Defense Authorization Bill: In 2006, Ryan voted against allowing women in the military to obtain abortions at U.S. military hospitals overseas using their own money, except to save the life of the mother or in cases of rape or incest.

The Protect Life Act: Ryan voted for this 2011 bill, referred to as the "Let Women Die Bill," which would have allowed hospitals to deny women emergency abortions, even if their life was in immediate danger.

Sanctity of Human Life Act: In 2009, Ryan co-sponsored this personhood bill that declared a fertilized egg should have the same legal rights as a human being.

Ryan is also anti-equal pay and has repeatedly voted against legislation guaranteeing women equal pay in the workplace, including the Lilly Ledbetter Fair Pay Act that President Obama signed into law in 2009. An anti-abortion stance is expected, but this is extreme.

Ryan has supported efforts to defund Planned Parenthood for years, including the recent efforts after the hidden-camera videos purported the organization was profiting from selling fetal tissue for medical research. Ryan said in a press release in September: "I think what they’ve done is vile. The more Americans that see just the grotesqueness of their procedures, the more they would agree that they don’t want their hard-working taxpayer dollars going to an organization like that. But I don’t think that the shutdown strategy is one that will help deliver on that goal." At least he doesn't want to shut down Washington over the feud.

Ryan's record on women's issues prove that he isn't likely to stand up for women's rights and promote gender equality in his role as speaker of the House.