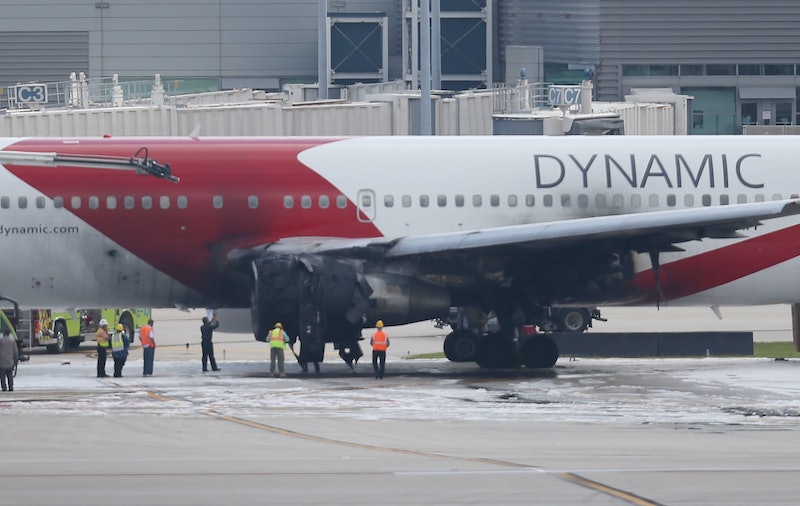 Reports out of Fort Lauderdale, Fla., on Thursday afternoon confirmed that a flight operated by Dynamic Airlines caught fire as it was preparing for departure. Huge plumes of dark smoke emanated from the plane as passengers were evacuated by the airplane's emergency exit slides, according to Yahoo! News. No fatalities have been reported as a result of the fire, but CNN reports stated that a local hospital, Broward Health Medical Center, was expecting six to 10 of the flight's passengers to be taken to the hospital; the Broward Sheriff's Office told CNN that none of the injuries sustained were fatal. It seems that the passengers and crew were all evacuated safely, but we're left with the question of exactly how the Dynamic Airlines plane caught fire.

At the time, the airline has not publicly released the precise cause of the fire. CNN's reports noted that audio recordings from an air traffic control tower captured one of the flight's pilots saying that oil was leaking from the plane's left engine. The pilot had stated, "The left engine looks like it's leaking a lot of fuel. There is fluid leaking out of the left engine." Not even 30 seconds after the pilot noted the fuel leakage from the left engine, another audio statement from the cockpit was captured by air traffic control saying, "Engine's on fire. Engine's on fire." Firefighters were able to quickly put out the flames, according to NBC.

A statement released by Dynamic Airlines, which is based in Greensboro, N.C., revealed few details about the fire's origins. The airline did however note that "The crew followed the emergency procedures, shut down the engine and evacuated the aircraft in order to assure safety to all on board," and said that the company "is conducting initial investigation and will issue further information once available."

The flight was set to depart the Fort Lauderdale-Hollywood International Airport in Fort Lauderdale to Caracas, Venezuela. The airport was closed down as crews worked to put out the fire. NBC reported that the aircraft itself, a Boeing 767, was 30 years old, and had initially been used by by Kuwait Airways in 1986. There were 101 people on board the flight, including passengers and crew. Dynamic Airlines said in their statement that they expect to resume their regular operations on Friday. The airport resumed flights shortly after the fire was put out.