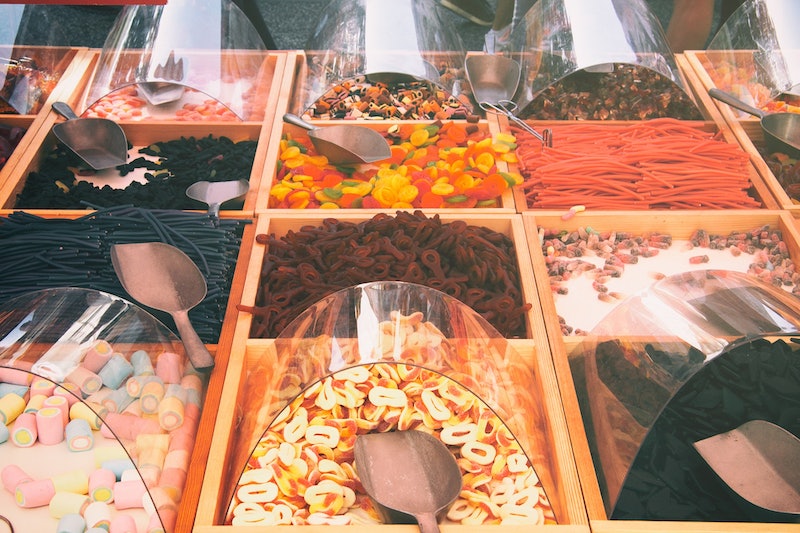 With Halloween fast-approaching (woohoo!), chances are you're already dreaming of all the guilt-free candy-eating you're gonna do this weekend. (Or even slowly pilfering from the stash you've got for Trick-or-Treaters.) And while I hate to be a total buzzkill, a new study is yet again reminding us just how not-so-great sugar is for us — by stressing how much healthier we get when we strip it from our diets. The study, conducted at the University of California San Francisco Benioff Children's Hospital, found that cutting sugar in kids drastically improved their health in just nine days. Though experts have been warning for years that consuming excessive sugar leads to a litany of health issues in kids and adults — including obesity, Type 2 diabetes, and heart disease — what we didn't know was just how quickly cutting sugar improves health in kids specifically.

For this study, researchers cut the amount of added sugar in the diets of a group of obese children while keeping their calorie intake the same. If the children normally ate a breakfast of doughnuts, the scientists would give them a calorically identical bagel instead. Although the results were ultimately what you might expect from such an experiment, the rate of change in the test subjects is what really surprised everyone, since they happened way quicker than anticipated.

As for other what other points this study drudged up, here's what you need to know:

Cutting Sugar May Sound Like The Worst, But The Payoffs Are Huge

In just nine days after cutting sugar, the children had lower cholesterol, blood pressure, and blood sugar. They even lost a little weight, despite having no change to their caloric intake or exercise activity. Jean-Marc Schwarz, senior author of the paper, said, “The positive message is you can very quickly reverse a bad picture [of health] in a very simple way.” On removing all added sugar from a child’s diet, he said, “I have never seen results as striking or significant.”

But that doesn't mean study authors removed all sugar — by "added sugar," Schwarz means any sweeteners added to food or drink to improve the taste, lower the cost, or extend its shelf life. That doesn't include the sugar that would be found naturally in, say, an apple. Still, on average, Americans consume 23 teaspoons of added sugar per day, which adds up to nearly 40 pounds of added sugar per person per year. The major offenders: Soda, teas, fruit drinks, energy drinks, snacks, desserts, and, yes, Halloween candy. (Sorry.)

All Calories Are Not Created Equal

Even when the test children continued eating salty junk foods, like potato chips and pretzels, they showed remarkable improvement without added sugar. Dr. Robert Lustig, another lead author of the study quipped, “A calorie is not a calorie.” Where a calorie comes from determines where a calorie goes and how your body reacts to it. Even if you eat 500 calories of chips, they’ll affect you differently than 500 calories of soda. Bad news, soda lovers. On the bright side? Great news, chip lovers.

The Labels On Our Food Might Not Tell The Whole Story

All of this has come to light amid calls to change the way food is labeled. A number of lobbying groups have recently demanded that the FDA require manufacturers to state the amount of added sugar in a given product, as well as the percentage of your "daily value." It’s no surprise that there’s been a huge amount of pushback from the food industry, which cites a lack of scientific evidence for the harmful effects of sugar. Well, maybe that argument won't work anymore.

With so much political momentum behind the issue of childhood obesity, it may be time for a more radical change in policy. With this study, there's certainly more than enough evidence to support an FDA restriction on sugar content and added sugar in foods. Still, the issue remains hotly debated. While one side says we're better off removing the option to eat added sugar altogether by banning it from foods, the other side argues that the government shouldn't be dictating what we choose to eat, or feed our kids. And then there's this remaining question: If we remove added sugars all together, what happens to Halloween? Back to bobbing for apples, I imagine. Jeez, science; way to be a buzzkill.

More like this
The 5 Best SLS-Free Toothpastes, According To Dentists
By Amy Biggart and Danielle Calma
Got Brain Fog? Here Are The Best Supplements For Memory & Cognition
By Carolyn Steber
Why TikTok Is Obsessed With Caesar Salads Right Now
By Alexis Morillo
TikTok's Butter Board Might Be The New Cheese Plate
By Emma Carey
Get Even More From Bustle — Sign Up For The Newsletter