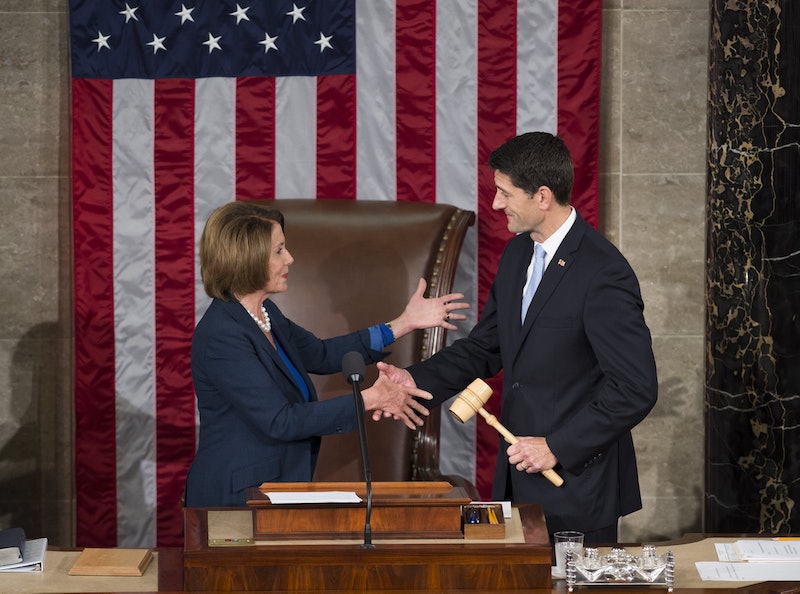 House Republicans' long national nightmare is over: They’ve finally elected a new Speaker of the House to replace John Boehner. Former vice presidential candidate and unofficial P90x spokesperson Paul Ryan was sworn in as the new Speaker on Thursday, putting an end to a weeks-long scramble among Republicans to find someone — anyone! — willing to lead the GOP conference in the House of Representatives. But things became awkward when, after the swearing in ceremony, Ryan refused to hug Nancy Pelosi, leader of the House Democrats. Why did Ryan dodge Pelosi’s show of affection?

Well, it’s possible that Ryan doesn’t like Pelosi, or hugs, or either. What’s more likely, though, is that he recognizes how exceedingly dangerous it is for an elected Republican — especially one who needs to curry favor with far-right conservatives — to be seen physically embracing a Democrat. This isn’t hyperbole: Hugs can be a big deal in politics, and some of them have destroyed political careers.

“It is my privilege to hand this gavel to the Speaker of the House, Congressman and honorable Paul Ryan,” Pelosi said on the House floor Thursday. At that point, she leaned in for a hug — but Ryan went for the handshake instead. Pelosi quickly adjusted and shook the new Speaker’s hand. Rude? Sure. But Ryan was acting out of self-preservation: He’s seen what happens to Republicans who hug Democrats.

Take Charlie Crist, the former Republican governor of Florida. In 2009, three weeks into Barack Obama’s presidency, Crist introduced the new president at an event in Fort Myers. As Obama walked onto the stage, Crist gave him a hug. The hug was caught on camera, and Crist's career in the GOP was more or less over. The next year, when Crist ran for the Senate, his Republican opponent in the primary hammered him endlessly for the hug, claiming that it “horrified” him. Crist lost this race, and his opponent — a then-unknown state senator named Marco Rubio — is now running for president.

We also have Chris Christie, who committed the cardinal sin of hugging Obama during a presidential campaign. This was weeks before the 2012 election, and Hurricane Sandy had just devastated Christie’s state of New Jersey. When Obama arrived to survey the damage, Christie greeted him with a hug. It was far from a political statement; the two men were meeting to coordinate a response to the natural disaster that had just befallen the state. But conservatives revolted against Christie, and the subject even came up at a recent Republican presidential debate.

There’s a belief in some conservative circles that any kind of reconciliation with Democrats, even something as small as a hug, is essentially treason to the conservative cause. This is likely why Ryan avoided Pelosi’s hug attempt like the plague. He’s already on thin ice with House conservatives; while they accepted his nomination to the Speakership, they did so reluctantly, and not as a unified block. Ryan is aware of his tenuous position among conservatives, and recognized that video of him hugging the number one Democrat in the House wouldn’t help his cause. Sadly, this was probably an accurate calculation.