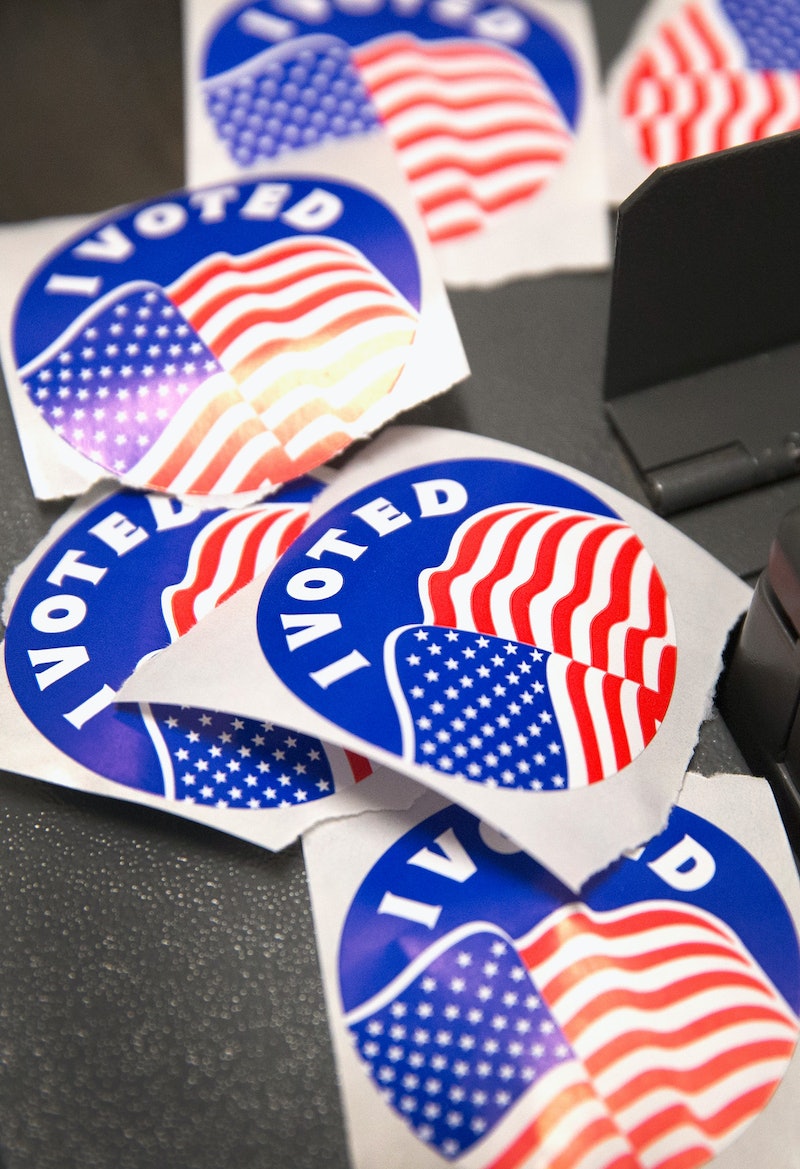 A lot has been said during this election about how youth voters — and women in particular — will impact the final outcome. Following President Obama's unprecedented ability to tap into the youth vote, many assume that the younger voting bloc will similarly show up for a Democratic candidate — and even more have assumed that candidate will be Hillary Clinton. But instead of assuming, the team at Her Campus decided to just ask college women how they feel about the 2016 election, and the results are pretty surprising. But they're probably not too exciting for Clinton supporters.

Her Campus surveyed a diverse group of 1,400 college women. A quarter were women of color, 22 percent were first-generation college students, and the poll was split between public and private universities. The questions ranged from simple, such as "Are you registered to vote?" (About 74 percent of respondents are, while 20 percent aren't) to in-depth questions asking how fiscally conservative they were. (For the record, 21 percent aren't sure where they fall fiscally.)

But the questions got truly interesting when Her Campus looked at what party the women identify with, what they think of the candidates, and who they would currently vote for.

There were some humorous revelations in the poll, such as the fact that 87 percent of the women view Donald Trump negatively, while over 57 percent didn't even know who Democratic candidate Martin O'Malley is. College women seem pretty split between whether they don't like, don't care about, or don't know Carly Fiorina, and Mike Huckabee will unfortunately find that less than 0.5 percent of college women would vote for him.

With 53.74 percent of the women identifying as Democratic, and 61 percent saying they are socially liberal, it's unsurprising that the most popular candidate was one of the Democrats. But what is surprising is that Bernie Sanders was the overwhelming favorite when women were asked who they would vote for currently. Sanders, who was chosen by 44.8 percent of respondents, outpaced Clinton by more than half. Clinton was only the preferred candidate of 19.11 percent. And unfortunately for Clinton, approximately 94 percent of the women said they plan to vote come November.

The number might come as a shock, especially after news of Clinton's skyrocketing new poll numbers. While the former secretary of state still sits ahead of her Democratic opponents nationally, a new poll shows her in a 40 point lead over Sanders in Iowa. But she's been losing female voters for a while. In September, a poll showed that only 42 percent of Democratic women said they would vote for her, a number that was 29 points down from an early poll in July.

But why is this happening? Clinton is the candidate for women, right? One of the cornerstones of her campaign has been fighting for reproductive rights, supporting Planned Parenthood, and advocating for paid paternity leave. And Her Campus' survey shows that these are extremely important topics to college women — when asked what issue was most important, reproductive rights was selected as most important, with about 19.5 percent of responses.

The problem for Clinton may lie in the multiple controversies that have plagued her campaign, but it might also have to do with Sanders. Like Clinton, Sanders is an advocate for reproductive rights, equal wage, and paid paternity leave. And he's not a passive supporter either — this summer, Sanders went to a religious university and discussed his stance on abortion. But Sanders' success might lie in how attractive his other policies are to young voters — namely education, which 16.69 percent of Her Campus respondents said was most important.

And more importantly, college women don't seem willing to budge on the education issue. When asked which issue was least likely to impact their vote, only 3.41 said education, compared to the 8.78 who listed reproductive rights as their lowest priority. This is where Sanders is likely to pull ahead. His promises for free tuition and lowering student debt, however nebulous they might sound to older voters, strike a chord with current students.

Luckily for Clinton (and pretty much all the Republican candidates), the election won't be decided by college women. But they're an important bloc, and one that has long been written off as solidly pro-Clinton. Perhaps as Clinton begins to enjoy higher numbers and favorability ratings, she'll refocus efforts on her base — but Sanders might be here to stay.