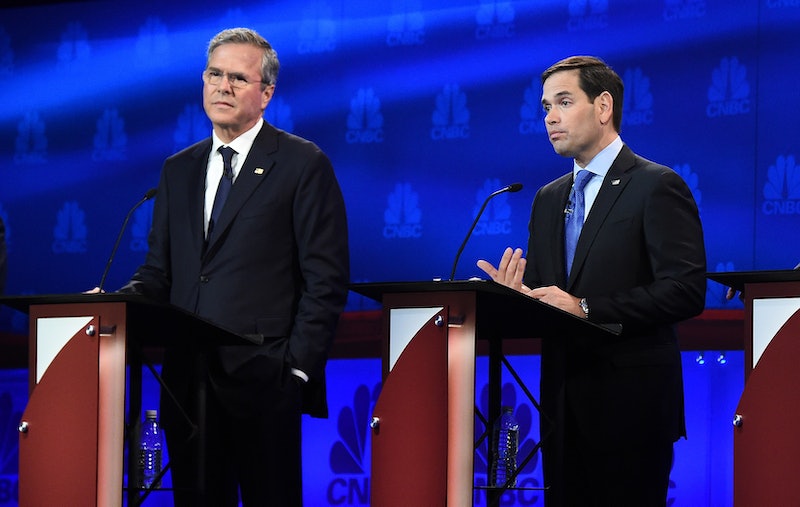 There's nothing quite like coming up with a killer comeback just in time to shut up your adversary and shut down an argument. And when you don't happen to be in the midst of a heated discussion yourself, there's an almost equally satisfactory feeling in watching someone else do it. Every audience member at the third GOP debate sure felt that way when Marco Rubio slammed Jeb Bush for his numerous attempts at coming after Rubio. While there's no denying Rubio's debate retort was good, here are five even better debate comebacks.

What made Rubio's response a real winner in the realm of comebacks was that it wasn't said in a mean, ruthless manner. Rather, the reply was said in that brutally honest (and true), 100 percent matter-of-fact kind of way. The exchange went down like this: Bush accused Rubio of basically never showing up to work because of an editorial published that described Rubio's poor attendance on the Senate floor due to his campaign obligations. Rubio responded by pointing out that the only reason Bush was going after his record and not other senators (like John McCain) was because the two were going after the same position. Rubio then told Bush, "Someone's convinced you that attacking me is going to help you."

While a retaliation like Rubio's is sure to stand out in a crowd, political candidates of the past have proven they're even better at bringing one another down when they show no mercy.

Reagan had not done so well in his first debate against Democratic candidate Walter Mondale and decided to up his game by spitting some straight wit the second time around. When asked whether he might be a bit too old to be president, Reagan said: "I want you to know I will not make age an issue of this campaign. I am not going to exploit for political purposes my opponent's youth and inexperience." Even Mondale laughed, because who wouldn't find Reagan's clever response giggle-worthy?

Not unlike Reagan, Democratic candidate Lloyd Bentsen chose the "you're too inexperienced" route in going after his opponent, Dan Quayle, in a 1988 debate. Quayle tried to save himself by claiming he had as much experience in Congress as Jack Kennedy did when he decided to run for President. Then Bentsen flat-out shut Quayle up with this zinger: "Senator, I served with Jack Kennedy. I knew Jack Kennedy. Jack Kennedy was a friend of mine. Senator, you're no Jack Kennedy." Note to politicians: JFK is off limits.

Ah, 1992 — when vice presidential candidate Al Gore took down then-President George H.W. Bush with a glorious piece of humble pie. Addressing Bush's attempt to take credit for helping end the Cold War, Gore told a debate audience, "George Bush taking credit for the Berlin Wall coming down is like the rooster taking credit for the sunrise." Sure, H.W. wasn't at present at the debate itself, but who cares? It was brilliant, nonetheless.

Ernest "Fritz" Hollings was serious about getting one of South Carolina's Senate seats as was he serious about his opponent's low intelligence. When Republican candidate Henry McMaster said Hollings should take a drug test, Hollings was quick to play just as dirty: "I'll take a drug test, if you'll take an IQ test." It was pretty much a landslide victory for Hollings after that comeback.

Vying for the position of U.S. senator from Illinois, Stephen Douglas and Abraham Lincoln went at it for seven, count 'em seven, debates in 1858. During one of those debates, Douglas called Lincoln two-faced. Lincoln's comeback was perfection: "I leave it to my audience. If I had another face, do you think I would wear this one?"