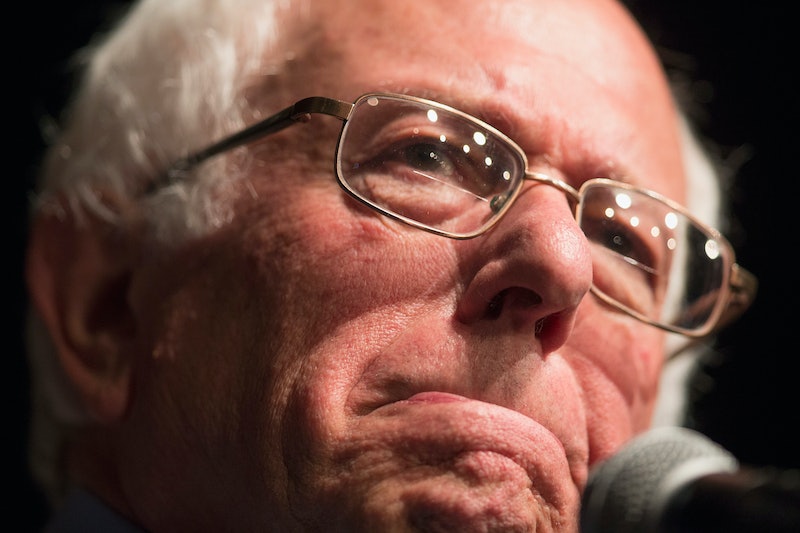 Democratic presidential hopeful Bernie Sanders has become more and more vocal about his stance on capital punishment. The Vermont senator spoke about the issue extensively at a recent appearance at George Mason University as well as on the Senate floor on Thursday. Bernie Sanders is against the death penalty and wants to abolish it altogether. It's a stance that firmly separates Sanders from fellow candidate Hillary Clinton, who simply takes issue with the frequency of the death penalty being used.

Sanders believes that by implementing the death penalty at all, the country is contributing to a vicious cycle of rampant violence that has seen shootings and murders "seemingly every week." He cites the fact that America stands as one of the few heavily developed countries that allows capital punishment as being one of the biggest reasons for capital punishment to be abolished altogether. Speaking to 250 students at George Mason University on Thursday, Sanders said that the United States can lead by example on this very important issue:

Those of us who want to set an example, who want to say that we have to end the murders and the violence that we’re seeing in our country and all over the world, should in fact be on the side of those of us who believe that we must end capital punishment in this country.

Conversely, during a Politics and Eggs breakfast held in New Hampshire, Clinton had this to say about capital punishment:

We have a lot of evidence now that the death penalty has been too frequently applied, and too often in a discriminatory way... I do not favor abolishing it, however, because I do think there are certain egregious cases that still deserve the consideration of the death penalty, but I’d like to see those be very limited and rare, as opposed to what we’ve seen in most states.

Sanders' remarks not only stand in opposition to Clinton's, but they also highlight a pivotal part of his comprehensive prison reform plan and come just as he's looking to introduce legislature that would remove marijuana from the DEA's list of Schedule I drugs, allowing for more freedom for states to legalize it without the fear of federal repercussions. According to the ACLU, marijuana-related arrests accounted for over half of all arrests in the country in 2010, resulting in mass incarceration and jail overcrowding.

Though he's been against the death penalty for years and is in favor of loosening restrictions on weed, this is perhaps the most vocal Sanders has been about both subjects. These views also mark one of the few ways in which Sanders and Clinton differ, meaning this could become a key point of contention as the race to the 2016 election continues to heat up.