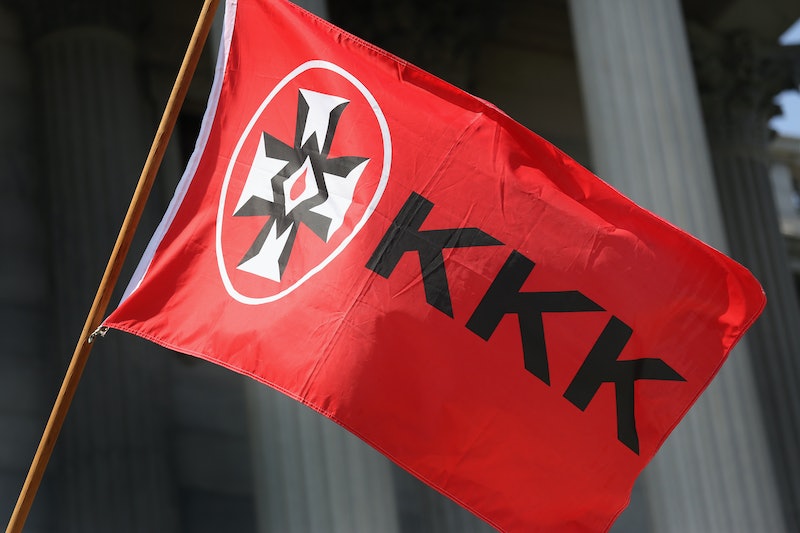 In a continuation of their ongoing campaign against the organization, hacktivist group Anonymous vowed to release Klu Klux Klan members' names and information sometime next month. According to the group, they plan to "remove the hood" from close to 1,000 members. And, although the hacker group doesn't always follow through, they will likely keep their promise since they've done this before.

Anonymous' campaign against America's oldest white supremacist group started last November, when a Missouri grand jury chose not to indict police officer Darren Brown for the shooting of unarmed black teenager Michael Brown. As many remember, protests and rallies broke out around the country. In response, the Missouri KKK chapter handed out fliers pledging to use lethal force to defend themselves against "terrorists masquerading as peaceful protestors [sic]."

The hacktivist group then launched #OpKKK, and quickly took over control of KKK Twitter accounts as well as hacked several KKK-affiliated websites. According to ZDNet, Anonymous obtained the phone numbers of some members and distributed them while encouraging individuals to harass the members. In addition, the group released the names, images, locations, and jobs of a handful of alleged Missouri-area Klan members. According to Anonymous, several of the individuals they named were involved in law enforcement and education.

This practice of obtaining and dumping personal information — which is referred to as doxxing — has become an increasingly large problem over the past year. Although the practice has been around for years, 2015 saw the rise of using info dumps as a very intense form of public shaming. Nothing exemplifies this better than the massive Ashley Madison hack, which collected the names, emails, and addresses of individuals looking to cheat on their spouses, and then published it all on the Internet. Several high profile individuals — including former TLC reality star Josh Duggar — were exposed as a result.

While very little personal damage came of the Planned Parenthood hack, the leaked Ashley Madison information destroyed marriages, humiliated individuals, and led to at least one suicide. And while there is a very large difference between a cheating spouse and a white supremacist, the potential ramifications of Anonymous' actions are just as serious. But, according to a press release by the organization, they feel validated in their actions.

Ku Klux Klan, we never stopped watching you. We know who you are … We never said we would only strike once ... After closely observing so many of you for so very long, we feel confident that applying transparency to your organizational cells is the right, just, appropriate and only course of action ... You are more than extremists. You are more than a hate group. You operate much more like terrorists and you should be recognized as such. You are terrorists that hide your identities beneath sheets and infiltrate society on every level.

It's difficult to argue with an organization that's taking on a supremacist group with a long history of violence, who speaks out against equality. But that doesn't necessarily make Anonymous' actions acceptable. There's a very heavy burden on them to make sure that all 1,000 names they are releasing truly belong to current and actual Klan members.

Anonymous doesn't have a strong track record when it comes to reporting the truth. In immediate aftermath of Michael Brown's death last summer, the organization released false information about the identity of the officer who shot Brown. The individual named by Anonymous wasn't even a police officer. Imagine the possibilities if even one name released by Anonymous is incorrect. With one mistake, a Google search could link an innocent person to the KKK forever.

Misinformation and the fear of physical retaliation are the risk that accompanies each of these info dumps that are meant to publicly shame or intimidate individuals. There's a responsibility that comes with having and releasing this information. And if there are negative results, these hackers — like Anonymous — should be willing to bear the consequences.