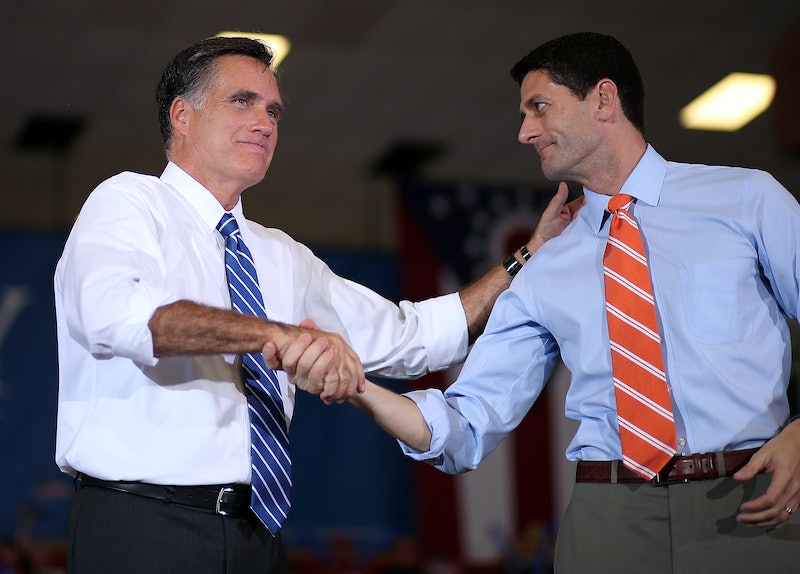 On Thursday, Paul Ryan has officially been sworn in as the new speaker of the House, replacing a retiring John Boehner. Ryan's appointment came about after a lengthy search for a nominee meant to help unite a Republican Party disenchanted even with its own House Majority Leader. Kevin McCarthy tried to distance himself from Boehner as a political tactic but still ended up dropping out of the nomination race. Ryan's own name was thrown around quite a bit before he decided to formally seek the position, but only after setting conditions on his own party. So it was nice to see some camaraderie when Mitt Romney and Paul Ryan reunited for a selfie to celebrate Ryan's new position.

It's clear even with the playful selfie featuring Romney, his wife, Ann, Ryan, and Ryan's wife, Janna, that the Romneys felt a sense of pride in the Wisconsin representative. In a Facebook post, the 2012 presidential hopeful praised his former running mate for his accomplishments as well as what's to come now that Ryan is at the helm of the Senate. Romney said:

Paul Ryan is taking on a task that is as critical as it is daunting. His lack of ego, respect for others, knowledge of government and unwavering character are exactly what is needed to restore balance to the federal government and to protect the rights and interests of our citizens.

Though 23 years younger that Romney, Ryan surprisingly isn't much of a selfie guy. A quick scan of famous selfies the former vice presidential candidate has appeared in yields little more than a lone selfie with the star of A&E's Duck Dynasty, Willie Robertson.

Romney, however, has been the king of random political selfies for well over a year. The Romney selfie is so ubiquitous that it prompted BuzzFeed to do a full round-up of some of the best shots featuring the former 2012 presidential candidate.

Political selfies are something that extends across party lines as well. Vice President Joe Biden joined Instagram and immediately posted a selfie with President Obama. Likewise, the selfie stick has been frequently used by Obama, most recently making an appearance during a trip to Alaska where he was able to get a selfie with famed outdoorsman Bear Grylls.

In short, clearly the selfie is a hip political tool. The #SpeakerSelfie that Romney took may be a sign of momentum to come for Ryan. At the least, it's a pretty fun photo.

More like this
Camilla Paid Tribute To The Queen In A Heartfelt Video Message
By El Hunt and Sam Ramsden
How To Follow The New Royal Family Social Media Accounts
By Sam Ramsden
Here’s Everything You Need To Know About Operation London Bridge
By Bustle UK
Dixie D’Amelio & Noah Beck “Love Each Other” Despite Breakup Rumors
By Julia Emmanuele, Jordyn Tilchen and Grace Wehniainen
Get Even More From Bustle — Sign Up For The Newsletter