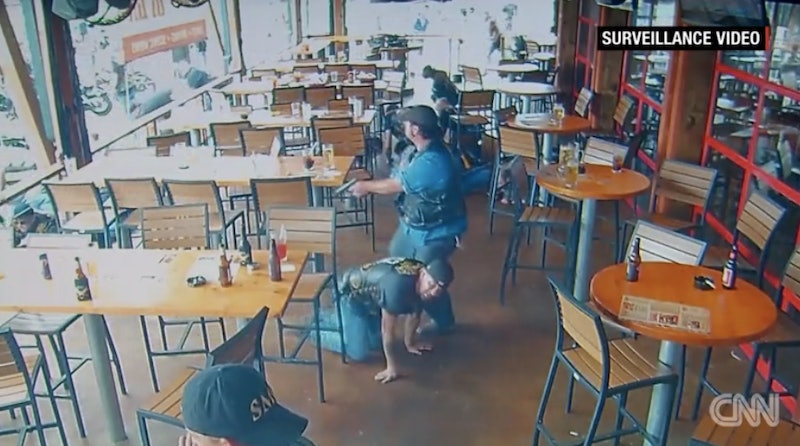 The parallels to FX's Sons of Anarchy were uncanny. In May, two rival biker gangs crossed paths at a Twin Peaks restaurant in Waco, Texas, and the ensuing fight erupted into violence and gunfire, leaving nine bikers dead and many more injured. There were 177 arrests made that day, and 480 weapons — everything from guns and knives to brass knuckles — recovered at the scene. But as CNN reports, it's been five months and there have been no charges filed in the nine deaths. On Thursday, CNN also released new video of the Waco biker gang shooting that could help a grand jury decide on where the charges should lie.

The surveillance footage, released by the Waco Police Department and obtained by CNN, shows graphic footage of the mayhem during what became one of the deadliest days in history for American motorcycle gangs. First, members of the Cossacks club are initially at the restaurant when the Bandidos drive up. The video shows them taking notice of something happening outside. According to police statements obtained by CNN, a Bandido member may have run into a Cossacks prospect, but whether intentional or not, it was enough to bring the Cossacks club to their feet. It's unclear who fired the first shot, but as the new footage shows, the confrontation quickly devolved into an all-out brawl.

Several men can be seen shooting guns as others pull their injured compadres to safety. While much of the conflict happened in the parking lot, the video also shows terrified restaurant patrons and waitresses ducking for cover inside the restaurant. CNN points out that many of the bikers there that day appeared to not have been involved at all, just bystanders to violence erupting outside. The Dallas Morning News also published unedited surveillance footage early Friday morning.

Now, there are questions as to whether the mass arrests and the city's decision to hold each detained person to a $1 million bond was, in fact, legal. A September GQ investigation showed that some of the people arrested were not even present during the time of the shootout. An attorney for one of the club's members, Michael White, accused Waco of looking to capitalize on the arrests, telling GQ, "The city of Waco is looking at paying out hundreds of millions of dollars. I don't think we've ever seen something on the scale of 175-plus people being arrested for something they did not do."

It's true this bizarre incident had fallen out of the public's memory, but the surveillance video will likely spur renewed interest in the case. As a grand jury deliberates on what charges to bring and against whom exactly, all we are left with at the moment are these horrific images of a day ride gone wrong.