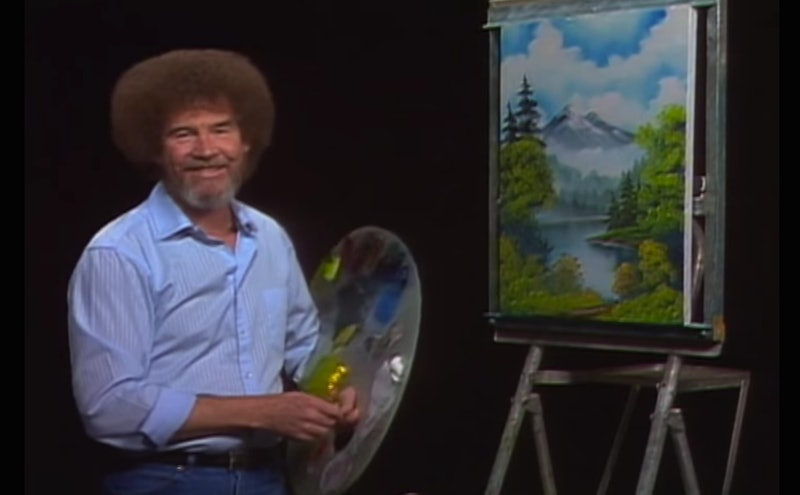 Hey, it's nearly the weekend! Got much planned? Are you looking for a nice way to unwind? How would you like to get some artistic inspiration, soothe your senses, and pay tribute to a beloved icon all at once? If this sounds up your alley, you're in for a treat: Twitch is streaming a complete Bob Ross marathon right now, in celebration of what would've been the late painter's 73rd birthday.

If you've never seen an episode of Bob Ross' The Joy of Painting before, you're missing out on some of the best and most enduring public television of its era — it ran for just more than a decade, from 1983 to 1994, ultimately ended by Ross' death from lymphoma in 1995. In all, as CNN details, the show produced a whopping 403 episodes, and each and every one of them are airing, in order, on Twitch. In all, the marathon will end up running clear into next week.

In the event that you've never heard of Bob Ross, you might want to get a little warmed up before settling in with such an epic marathon. If you're looking to get a taste of that Bob Ross magic first, here's a great representative example: Mystic Mountain, which first aired in April of 1990.

As a technical achievement, The Joy of Painting is charmingly stripped-down. It's just your old pal Bob, a canvas on an easel, a palette and brushes, and a black void background. Over the course of a nearly 30-minute episode, that canvas inevitably transforms from a few pre-applied layers of paint, into some sort of striking vista or nature scene, all thanks to Ross' expert hand. Watching a full episode attentively is sort of like watching magic happen — from an amateur's perspective, at the very least, it's incredible how casually and easily he makes such evocative imagery, and in such a short amount of time.

There's more going on than just painting, however. As you might notice the first time you watch an episode, there's a charming, warm quality to the show that transcends its basic function as a painting tutorial. In addition to showing a simple, impressive mastery over the canvas, Ross functions as practically the ideal of a kind, nurturing instructor, and does so in a soft, soothing voice that can really tickle the space between your ears. Some people use episodes of his show to help them fall asleep, a testament to just how cozy the whole production feels.

Suffice it to say, this is an opportunity for a rather heartwarming shared experience, even if you just keep the stream running in the background throughout your day to help relieve some stress. If you're interested, be sure check it out over at Twitch at least once in the next few days.

More like this
The ‘Ted Lasso’ Cast Singing Along To “Sweet Caroline” Is Pure Gold
By Sam Ramsden
Nicola Coughlan’s Description Of Meeting Olivia Colman Is Just So Nicola Coughlan
By Sam Ramsden
Behind The Hilarity Of The "POV: You Walk Into My Room" TikTok Trend
By Lexi Inks
Why TikTok Is Flooded With Controversial Videos About "Pick Me Girls"
By Courtney Young
Get Even More From Bustle — Sign Up For The Newsletter