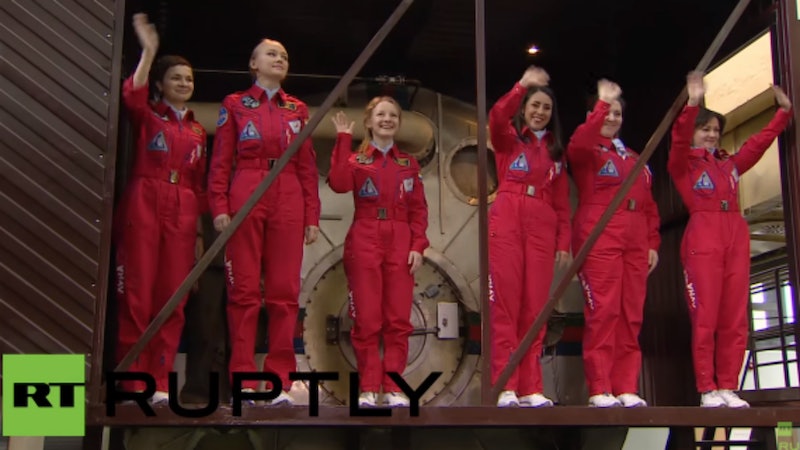 Here's a bit of badassery to kick off your weekend: on Wednesday, six Russian women boarded a mock spacecraft for an eight-day study aimed at determining how an all-female crew would handle long-haul space travel. Holla, ladies! Subjecting yourself to intense physical, social, and psychological strain in the name of science and furthering women in the aerospace industry is — dare I say it? — out of this world. What isn't nearly as (inter)stellar, though, is the fact that these extremely smart, capable, and highly-specialized women started their mission by fielding inexplicably sexist questions.

Prior to loading into their simulated spacecraft, the women — Yelena Luchitskaya, Darya Komissarova, Polina Kuznetsova, Anna Kussmaul, Inna Nosikova, and Tatyana Shiguyeva — sat down for a press conference to discuss the implications of having an all-female crew on a trip to the Moon and back. The prevailing sentiment would seem to be one of pride and empowerment. "There's never been an all-female crew on the ISS," said experiment supervisor Sergei Ponomaryov. "We consider the future of space belongs equally to men and women and, unfortunately, we need to catch up a big after a period when, unfortunately, there haven't been too many women in space."

Things took a decidedly dicier turn during the Q&A panel, though, starting with Igor Ushakov, the director of Moscow's Institute of Biomedical Problems responsible for conducting the experiment. "It will be particularly interesting in terms of psychology," said Ushakov. "I'd like to wish you a lack of conflicts, even though they say that in one kitchen, two housewives find it hard to live together."

Say what? Admittedly, Russia only just sent its fourth female cosmonaut, Yelena Serova, into space last year, but they were the first country to ever send a woman into space — Valentina Tereshkova, back in 1963. Yet, sadly, Ushakov wasn't the only man in the room who couldn't wrap his head around the fact that women can travel to space without things like vanity or emotions effectively rendering them useless. Could it be time someone introduce this old boys' club to the #AskHerMore campaign? Because this isn't the first time a female space scientist has faced sexism prior to a mission. Last year, Serova complained about the media's obsession with how she would wash her hair — to which she pointed out that male cosmonauts don't have to deal with such asinine and superficial questions.

Like Serova, the six women embarking on this experiment didn't let the sexist line of questioning rattle them, either. Rather, they used the time to make three crucial points about gender equality in space before heading off to spend over a week simulating life on the International Space Station. Here's what they had to say:

When a member of the media asked, "How will you deal without being with makeup for eight days?" Komissarovatook the high road with a simple reminder, "We are very beautiful without makeup." As in, women don't need makeup to function or be beautiful, and definitely not while carrying out 10 psychological and biological experiments a day — in space. Please, mister, take all the seats.

2. This Is Work, Not A Dating Service

In response to a fellow who questioned how the women would cope with not being around men (because every woman spends every waking minute with a man?), Kussmaul cut to the chase, saying, "We are doing work. When you're doing work, you don't think about men and women." It blows the mind to think women can focus on anything when there isn't a man around to fawn over, yet somehow we manage. As these women obviously will.

3. Women Are More Than Raw Emotion

Throwing it back to her director's own inference that a group of women can't possibly coexist in an isolated space without clawing each other's eyes out, team leader Yelena Luchnitskaya made it abundantly clear they'd come through just fine: "I'm sure we all have the education, personal qualities, and the upbringing, at the end of the day [to deal with conflict]. So far, I can't imagine anything that would rattle us."

Watch a short video of the scientists gearing up for their mission: