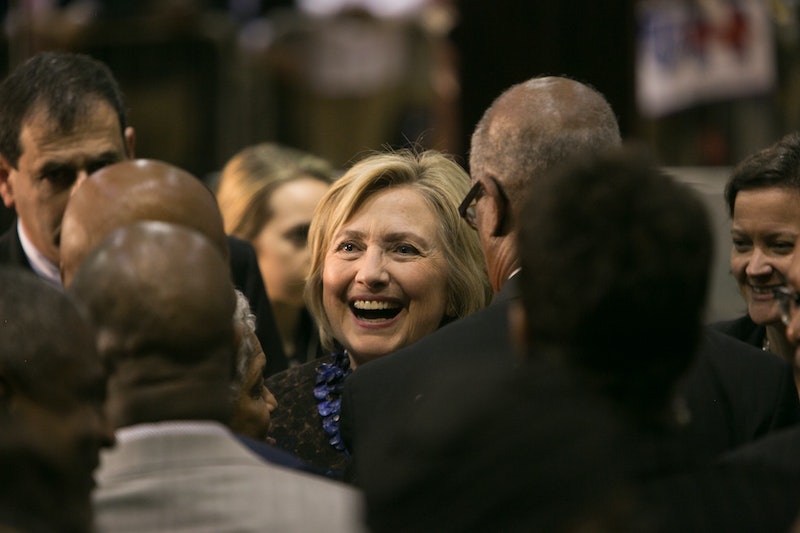 Say what you will about Hillary Clinton's trustworthiness and likability, but you can't deny that she's ambitious. In the State Department's release of 7,000 new pages from the 2016 candidate's private server on Friday, one specific email showed Hillary Clinton had been eyeing a presidential run since her first few weeks as secretary of state in the Obama administration. Sent by former Bill Clinton adviser and family friend Sidney Blumenthal, the message seemed to indicate that Clinton and her aides were keeping close tabs on her favorability numbers from the start, in order to suss out a second potential presidential run in 2016.

"In case your daily briefing doesn't include it, Bill Schneider tells me that the CNN poll shows you at 71 percent favorability, seven points above Obama at 64 (higher than any recent president at this point)," wrote Blumenthal in a message titled "FYI..." from March 25, 2009, pointing to the fact that Clinton's image among Republicans in particular was stronger as well. "You've achieved supra-political status, not anti-political or apolitical (they know who you are) ... [and] recent polls show that the Democrats are likely to pick up three Senate seats in 2010 [...]." Blumenthal added that the two factors combined would present a "unique opening" later on.

Whether or not Clinton herself intended to test the presidential waters at that point was unclear — but the revelation that nine weeks after being sworn in as secretary, Clinton was already being tipped off about her rising poll numbers in comparison with the newly elected Obama couldn't be dismissed. From the very beginning, Clinton was already being vetted for the presidency.

That sort of political ambition wasn't exactly new — Clinton's presidential ambitions stemmed from as far back as the early '90s. In Daniel Halper's 2014 book Clinton, Inc.: The Audacious Rebuilding of a Political Machine, one former Clinton aide recalled asking about the then-FLOTUS' hesitation at releasing records from her tenure as partner at the Little Rock, Arkansas-based Rose Law Firm (the records themselves had been requested by investigators looking into the infamous Whitewater scandal). "Why doesn't she just come fucking forward and release them?" the aide remembered asking press secretary Lisa Caputo. "The president had no business in the matter. It won't hurt him."

"We can't ... Hillary's got her own ambitions," Caputo replied. When the aide pressed for an explanation, Caputo reportedly replied, "Well, there's '04. Or '08."

Years later as predicted, Clinton mounted a promising 2008 White House run of her own, however the bid went defunct after months of tough battle with then-freshman Illinois Sen. Barack Obama. Exhausted and defeated, Clinton eventually warmed to Obama's offer of a Cabinet position in the administration, taking up the State Department reins in January 2009.

Clinton's decades of careful planning, however, hadn't gone to waste. Per Blumenthal's March 25 email, Clinton's poll numbers, too, showed potential for another White House bid in 2016, if not 2012.

"You are credited by Americans as the one above all who represents the US in the world," wrote Blumenthal. "Obama is now seen as a more political, contentious, partisan figure."

Although it appeared Clinton never responded to Blumenthal's missive, it's a safe bet she took it under heavy consideration. In a June 2009 email, Blumenthal once again reminded Clinton that while Obama had won the election based on Blumenthal believed was shallow popularity and charisma, positive public perception of his actual policies would begin to erode eventually — indirectly handing Clinton a boost of confidence in her own failed 2008 campaign.

"See NYT poll this am on public beginning to divide Obama persona from policies?" Blumenthal wrote. "That's the vulnerability of charisma [—] to protect it requires successful policies."

In the years that followed, Clinton seemed to do just that, ratcheting up her charm and using her time in the State Department to cover her bases in terms of foreign policy experience (an area with which Obama himself had no doubt struggled). Even after a brief hiatus from professional politics following her departure from the State Department in 2013, Clinton's "retirement" seemed like something of a sham; And by April 2015, despite a bevy of partisan headaches and scandals that erupted in the days prior to her announcement, Clinton finally entered her second presidential race.

The latest State Department email drop hasn't revealed much important information beyond the typical advice from the former secretary's staff and administration colleagues — after all, the majority of Clinton's "classified" emails (as deftly pointed out by USA Today) weren't top secret but were instead ranked quite low on the confidentiality scale.

Regardless, Clinton's fascinating back and forth with advisers and confidantes sheds real light on the 2016 candidate's intentions and proves, without a doubt, that she's been seriously gunning for a White House seat of her own for a very long time.